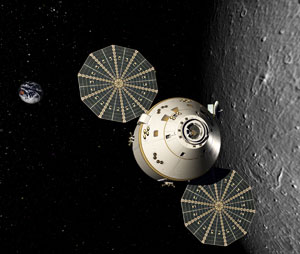 Lessons from the past are guiding NASA's next step into the future, as the space agency prepares to replace the space shuttle with an Apollo-style vehicle for human explorers.

The vehicle is Orion, named for one of the brightest and most recognizable star formations in the sky. It will be a multi-purpose capsule -- the central member of a family of spacecraft and shuttle-derived launchers that NASA's Constellation Program is developing to carry astronauts back to the moon and later to Mars. The first flight with astronauts aboard is planned for no later than 2014. Orion's first flight to the moon is planned for no later than 2020.

In what amounts to one of the most significant NASA procurements in more than 30 years, two industry teams, Northrop Grumman/Boeing and Lockheed Martin, spent the past 13 months refining concepts, analyzing requirements and sketching designs for Orion. On Thursday, managers of NASA's Exploration Systems Mission Directorate revealed that Lockheed Martin Corp. of Bethesda, Md., has been chosen to build it.

Versatility will be Orion's trademark. It is being designed to fly to the moon, but could also be used to service the International Space Station in low-Earth orbit. "Our intent is to keep the destination focusing the design but we are not excluding the possibility of using Orion for other things, such as de-orbiting the Hubble Space Telescope in the 2020s or making a trek to an asteroid," said Jeff Hanley, who manages the Constellation Program from the Johnson Space Center in Houston.

Orion improves on the best features of Project Apollo and the Space Shuttle Program, increasing the likelihood of success. "Going with known technology and known solutions lowers the risk" said Neil Woodward, director of the integration office in the Exploration Systems Mission Directorate at NASA Headquarters in Washington. Although Orion borrows its shape and aerodynamic performance from Apollo, the new capsule's updated computers, electronics, life support, propulsion and heat protection systems represent a marked improvement over legacy systems. We're pushing the technological edge, but only where it makes sense," says Woodward.

Unlike the winged space shuttle orbiter, which is mounted beside its external fuel tank and boosters for liftoff, Orion will be placed on top of its booster to protect it from ice, foam, and other launch system debris during ascent. Placing the spacecraft on top of the launch vehicle also allows the addition of an abort system that can separate capsule and crew from the booster in an emergency. 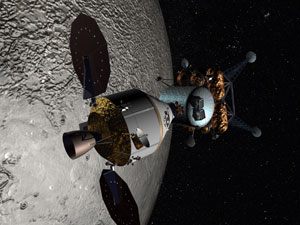 Among the most obvious improvements is the command module's size. Measuring 16.5 feet in diameter, Orion will have more than 2.5 times the interior volume of the three-seat Apollo capsules that carried astronaut crews to the moon for missions lasting only several hours to several days in the late 1960s and early 1970s. Orion will be crucial for developing a sustained human presence on the moon. It will be able to carry four astronauts to the moon and support missions of up to six months.

"You don't get the chance to build a new human spacecraft every day," said Skip Hatfield, the Orion project manager in Houston. "This is a wonderful opportunity for NASA to learn from the things we've done in the past, take the best of those activities, and blend them together using the latest methods of manufacturing and management to make a system that will enable us to go out and explore beyond low-Earth orbit."

Hatfield and Hanley noted that NASA is leveraging the talent and resources of the entire agency in the design and development of Orion. While Constellation Program management resides at Johnson, all 10 of the agency's field centers are making important contributions.

The contract with Lockheed Martin has a seven-year base valued at about $3.9 billion for design, development, testing and evaluation of the new spacecraft. Production and sustaining engineering activities are contract options worth more than $4 billion through 2019.

+ Read More About Constellation Work Assignments
› Back To Top