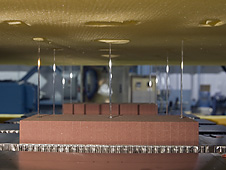 NASA's new spacecraft Orion will face extreme conditions throughout its voyage to the moon and the journey home. On the blistering return through Earth's atmosphere, Orion will make good use of atmospheric drag to decelerate from more than 25,000 miles per hour (40,233 kph) but, in the process, encounter temperatures as high as 5,000 degrees Fahrenheit (2,760 degrees Celsius). And while orbiting the moon and Earth, temperatures can fluctuate up to 400 F (222 C).

To protect Orion and its crew from such severe conditions, NASA's Constellation Program is developing a new thermal protection system, an effort led by NASA's Ames Research Center at Moffett Field, Calif.

"In concept, we're doing something very similar to Apollo," said Jeff Jones, Thermal Protection Systems project manager at NASA's Langley Research Center, in Hampton, Va., one of the centers partnering with Ames. "It looks much like it, but once you get past the basic concept, it's very different. With this much larger spacecraft, the challenge is also much greater."

The base of Orion's heat shield will endure the most heat and will erode away or "ablate" in a controlled fashion -- transporting heat away during the descent through the atmosphere. NASA is considering two ablative materials for the heat shield, AVCOAT and PICA, and testing on the materials is in progress.

Both materials proved successful in previous missions to space. AVCOAT, which is manufactured directly onto the spacecraft and has an embedded honeycomb-like material, was used for the original Apollo capsules. PICA, or Phenolic Impregnated Carbon Ablator, which is manufactured in blocks and attached to the vehicle after fabrication, was used on Stardust, NASA's first unmanned space mission dedicated solely to exploring a comet.

Since AVCOAT hasn't been used in nearly 40 years, and PICA has never been used on a manned mission, engineers at Langley and Ames are performing rigorous testing on both candidate materials. 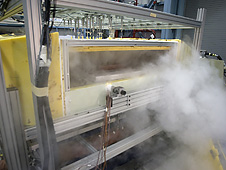 "Langley's had a long history of working with aircraft as well as spacecraft in [structural design and analysis testing], and we've always had a very strong research capability in structures and materials as well," Jones said.

Engineers at Langley are using their research capability by conducting a number of tests on PICA and AVCOAT to investigate the thermal and structural behavior of the ablators attached to a honeycomb backing structure. Testing will ensure the materials will function properly in harsh conditions during launch and while orbiting the moon or Earth.

Tests include flexural tests, which measure the elasticity and failure mode of the specimens; modal tests, which are frequency response tests that verify the integrity of the design; vibration and acoustic tests, which simulate Orion launch conditions the thermal protection system will endure; transient thermal tests, which explore the range of temperatures the ablators could experience; and environmental chamber tests, which study the materials in the extreme temperatures of space.

"The whole series of tests gives us a better understanding of how the materials will perform," said Chris Lang, lead test engineer for the environmental chamber test at Langley.

The test conditions simulate the extreme environment Orion will encounter. During Earth and lunar orbit, Orion could face temperatures as high as 250 F (121 C) and as low as -150 F (-101 C), a temperature difference of up to 400 F (222 C). Lang and his team are using data from the tests to investigate the performance and stability of materials in the simulated conditions of space. 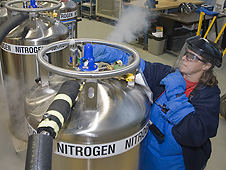 During a "cold test," samples of the ablative materials are secured in an environmental chamber that uses liquid nitrogen to reach a temperature of -150 F (-101 C). The specimens endure the intense cold for no less than three hours, sometimes longer.

With a "hot test" on the other hand, the materials withstand temperatures up to 250 F (121° C) for those three hours.

"When heated up or cooled off, the different materials are going to grow and contract by different amounts," Lang said. "That will cause thermal stresses and bending, and we want to understand the behavior and make sure the materials can survive in those conditions -- that they won't crack or come apart."

Currently, the leading candidate material is AVCOAT with PICA as the alternate. The final decision will be made in March of 2009.

"AVCOAT was the material that they used for the Apollo heat shield, so obviously they want to look at that now because it has flown, and it worked," Lang said.

NASA's field centers are working together to ensure the best decision is made concerning the materials so Orion can complete the journey home successfully.

"The project requires interaction between a lot of different centers and people to make it all come together," Jones said.

Because of that interaction and NASA's research, Orion will safely protect its crew from the extreme temperatures of spaceflight.