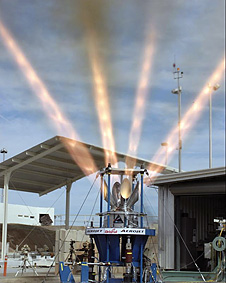 NASA successfully tested the Launch Abort System jettison motor, the first full-scale test for the Constellation Program's Orion crew exploration vehicle. The jettison motor is a solid rocket motor designed to separate the Launch Abort System from the crew module on a normal launch and to safely propel the abort system away from the crew module during an emergency.

"This was a major success for the Orion Launch Abort System team," said Mark Cooper, NASA's integrated product team lead for LAS Propulsion at Marshall Space Flight Center in Huntsville, Ala. "The test provided valuable data on motor performance that will allow design and analytical refinements by our contactor team. The test is the culmination of intense and focused work by the entire jettison motor team."

Demonstrating the jettison motor performance is critical to the development of the crew module's launch abort system, which will offer a safe escape in the event of an emergency on the launch pad or during the climb to a low Earth orbit. The jettison motor test was a critical demonstration milestone in the Orion Project’s preparations for the first of a series of flight tests of the Launch Abort System currently scheduled for late 2008.

NASA's Langley Research Center in Hampton, Va., manages the launch abort system design and development effort with partners and team members from NASA's Marshall Space Flight Center, Huntsville, Ala. Langley's Launch Abort System Office performs this function as part of the Orion Project Office located at NASA's Johnson Space Center, Houston. The abort system is a key element in NASA's continuing efforts to improve safety as the agency develops the next generation of spacecraft to return humans to the moon.