NASA's Gantry: A Bridge to the Future

Towering far above the trees at Langley Research Center in Hampton, Va., NASA's gantry is far more than a directional landmark for local aviators, fishermen and sailors. This red and white structure looming in the blue is a piece of national history. 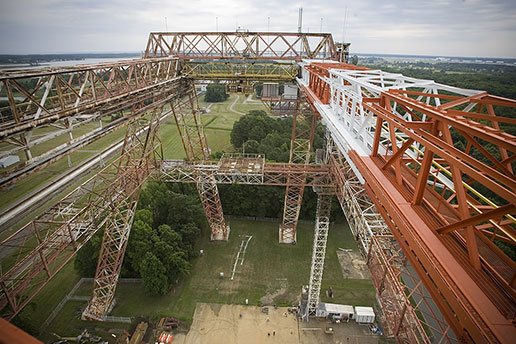 Image above: The gantry is receiving a fresh coat of protective paint as part of the summer renovations. Other upgrades include a new bridge, a new elevator, floor repairs and a new parallel winch system. Credit: NASA/Sean Smith

The 240-foot-high massive steel structure has been serving NASA for over 40 years and still holds a vital place in research, discovery and exploration.

The gantry was built to train Apollo astronauts to land on the moon. Now it helps researchers test the possibility of landing NASA's next crew capsule -- Orion -- on land. 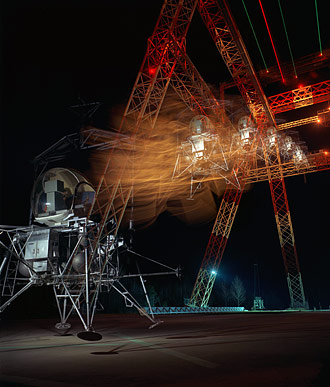 Image to right: A multiple-exposure image of a simulated lunar landing at the NASA gantry in April 1967. Credit: NASA

"The gantry has supported us in the past with Apollo and is bringing us to the future in space exploration," said Robin Hardy, test engineer.

The future is coming quickly. Technicians and engineers just finished their first year of Orion testing, completing 41 swing tests at the gantry and 12 vertical drops.

Orion is scheduled to journey to the moon by the year 2020. Drop tests at NASA Langley are helping NASA determine the best option for Orion's return.

Rather than landing in water as Gemini, Mercury and Apollo did, Orion may land on dry ground. This would allow for easier retrieval and vehicle reusability.

"It's much easier to refurbish from a land landing as opposed to a water landing," said Richard Boitnott, lead test engineer.

Engineers and technicians at the gantry have conducted three types of tests for this dry landing option, each progressing from the previous to more realistic features.

"We started out with small test articles and we've progressed up," said Boitnott.

Testing began by dropping a test article – a framework used to represent the future capsule – that was half the size of what Orion will be. For the second round of testing, engineers then added a welded structure, representing Orion's intended shape to examine the article's tendency to flip or to remain upright. The third round of testing involved two different sets of airbags under a flat-bottomed test article that was approximately 7,000 pounds with a full-scale 16.5-foot diameter. 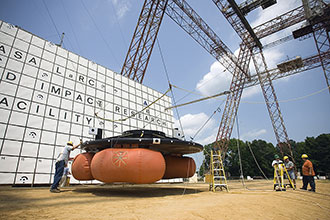 Image to left: Engineers and technicians prepare to lift the Orion test article for a pendulum-swing drop test at the gantry. These tests are helping researchers determine the best technology for returning Orion to Earth. Credit: NASA/Sean Smith

Orion tests have concluded for the summer as renovations to the gantry begin. The structure will be upgraded with a new bridge, a new elevator, floor repairs and a new parallel winch system.

"They're making really good progress on the enhancements to the gantry and modifications," said Boitnott. "The new bridge will support up to 64,000 pounds with its 16-ton winch double-hitched, and our new parallel winch system will increase our ability to accurately control pitch and pitching rotational rate."

A break from testing does not mean a break from work, however. Engineers have loads of data and information to process, analyze and learn from.

Hardy and Boitnott, along with other engineers, will take those results and use them to prepare for more realistic testing. If renovations and second-generation airbag procurements go according to schedule, testing will resume in late October.

Rather than having a flat bottom like the most recent test article, the future test article will have a curved underside and more lightweight airbags, both more similar to the actual design of the Orion crew exploration vehicle. Testing will also involve more airbags than previous drop tests, further drawing the design closer to Orion's.

"We'll be able to see interactions between airbags, and we'll be testing a prototype of the actual capsule that will fly," said Hardy regarding future testing beyond the planned second- and third-generation airbag tests. 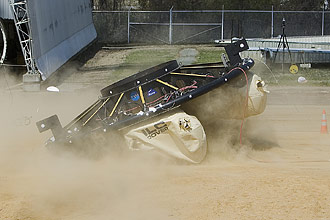 Image to right: The Orion test article lands at the base of the gantry from a pendulum-swing drop test. Credit: NASA/Sean Smith

"Future testing will reduce risk associated with using airbags and will gather more information about possible failure modes," said Boitnott. "We learn from one generation of airbag testing to the next and make improvements to give NASA a more reliable landing system."

The Orion drop tests have given researchers working at the gantry a renewed mission.

"It's been good to see the gantry really utilized for space application," said Boitnott. "This has really brought the group a lot of attention, locally with NASA Langley and even outside of NASA. I think we're contributing in a very meaningful way to this land landing by conducting these tests."

With enhanced capabilities and a revitalized purpose, the gantry is again playing a major role in ensuring America's leadership in space.