Returning humans to the moon by 2020 may seem like a distant goal, but NASA's Constellation Program already has scheduled the first test flight toward that goal to take place in less than 12 months.

The Constellation Program is developing a new space transportation system to travel beyond low Earth orbit, expanding human exploration of the solar system and extending human reach to the moon and Mars.

The 90-second flight will not leave Earth's atmosphere, but it will be an important first step toward demonstrating how NASA intends to build safety into its next generation of spacecraft, including the Ares I and V rockets and the Orion crew capsule. 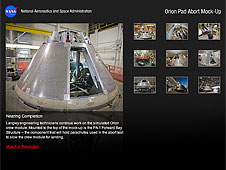 The first in a series of unmanned abort tests, known as Pad Abort-1 or PA-1, is scheduled for late 2008 at the U.S. Army's White Sands Missile Range in New Mexico.

The tests will help verify that NASA's newly-developed spacecraft launch abort system can provide a safe escape route for astronauts in the Orion crew capsule in the event of a problem on the launch pad or during ascent into low Earth orbit atop the Ares I rocket.

Orion is the Constellation Program's new crew exploration vehicle, set to carry as many as four crew members to lunar orbit and return its crew safely to Earth after missions to the moon's surface. The 5-meter (16.5 foot) wide, cone-shaped capsule also will provide transport services to the International Space Station for as many as six crew members.

But before launching to the moon or to the International Space Station, system tests on Earth have to prove the technologies work.

The pad abort test will simulate an emergency on the launch pad. Upon command from a nearby control center, a dummy Orion crew module -- which would sit on top of a rocket for an actual launch -- will be ejected directly from the launch pad by its rocket-propelled launch abort system to about one mile in altitude and nearly one mile downrange.

That is why engineers and technicians at NASA's Langley Research Center in Hampton, Va., NASA's Dryden Flight Research Center in Edwards, Calif., and industry partners on the Orion Project are taking particular care to fabricate and equip the first flight test articles with extreme precision.

Engineers and technicians at Langley designed and fabricated the structural shell of the simulated crew module for the first pad abort test and now are conducting a series of ground checks on the structure. The "crew module simulator," as it is called, accurately replicates the size, outer shape and mass characteristics of the Orion crew module. 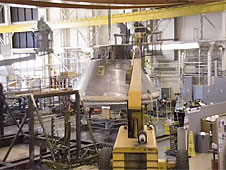 A time-lapse movie of the construction of the Orion crew module pad-abort mock-up.
Credit: NASA/Sean Smith

"The next step is to ship the completed crew module simulator to Dryden, where they will outfit it with the smarts -- the computers, the electronics, the instrumentation -- all the systems that need to work in conjunction with the structure," said Phil Brown, manager of the Langley Orion Flight Test Article Project.

After the instrumented dummy crew module is delivered to White Sands this summer, it will be integrated with the PA-1 launch abort system flight test article, a vertical tower containing the escape rocket motor and a guiding rocket motor currently under construction at Orbital Sciences, Inc. in Dulles, Va. The combined crew module and launch abort system will be placed on the launch pad being constructed especially for the abort flight test series.

During the pad abort test sequence, the escape system's main abort motor will fire for several seconds, rapidly lifting the simulated crew module from the test launch pad, after which the escape system will detach, and three 116-foot-diameter parachutes will deploy to slow the module for landing.

The test will provide early data for design reviews to follow and will be followed by an ascent abort test in 2009 and a second pad abort test scheduled for 2010, both at White Sands. A parallel series of higher-altitude launch tests will commence at NASA's Kennedy Space Center in Florida in 2009.

"These flight tests will either confirm that our system works or help us identify and correct any defects that surface," said Greg Stover, manager of the Orion Launch Abort System Project Office, located at Langley. "Our goal is that on every manned mission the launch abort system will be the most reliable system that we hopefully never have to use."

The Orion Project Office, located at Johnson, is leading the development of the Orion spacecraft for the Constellation Program, which also includes the Ares I and Ares V launch vehicles, the Altair human lunar lander and lunar surface systems to support sustained crew habitation.

For more information about Orion and the Constellation Program, visit: