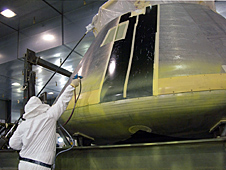 Engineers and technicians at NASA's Langley Research Center fabricated the structure, which precisely represents the size, outer shape and mass characteristics of the Orion space capsule.

The Orion crew module mockup arrived on an Air Force C-17 at NASA Dryden March 28. After painting in the Edwards Air Force Base paint hangar, the conical capsule was taken to Dryden for installation of flight computers, instrumentation and other electronics. Dryden will send the completed module to the U.S. Army's White Sands Missile Range in New Mexico, where it will be integrated with the escape system for the first abort flight test in late 2008. The tests will ensure a safe, reliable method of escape for astronauts in case of an emergency.

Part of NASA's fleet of next generation spacecraft, Orion is being designed to take astronauts to the International Space Station and then back to the moon by 2020.