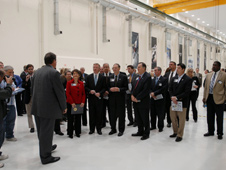 Representatives from NASA, Lockheed Martin, Space Florida and the state of Florida participate in a ceremony at NASA's Kennedy Space Center in Florida to mark the completion of renovations on the historic Operations and Checkout Building high bay for use by the Constellation Program. At left, Richard Harris, with Lockheed Martin, describes activities that will take place in the building. In front of him are U.S. Rep. Suzanne Kosmas and Lt. Governor Jeff Kottcamp. Originally built to process space vehicles in the Apollo era, the building will serve as the final assembly facility for the Orion crew exploration vehicle. Photo Credit: NASA/Dimitri Gerondidakis

Kennedy Director Bob Cabana welcomed participants to the event and thanked the state of Florida for their $35 million commitment toward the high bay renovations.

“This is a real program and we have real hardware here,” Cabana said. “We’re ready for Orion; we’re ready to go back to the moon.” Cabana said the new facility will create about 400 jobs, which is important at this time.

“We need to focus on our future,” Cabana said. “With change comes opportunity.”

“The place where mankind literally reaches for the stars is from right here in Florida,” said Lt. Gov. Jeff Kottkamp. “We’re proud of that history. We embrace that history, and it’s something we believe everyday we should work hard to build on.”

Kottkamp said that he and the governor recognize Florida’s invaluable pool of talented work force in place at Kennedy.

“We are determined to do all we can to keep those men and women right here in the sunshine state working at NASA, as well as our fast-emerging commercial aerospace industries,” Kottkamp said.

U.S. Rep. Suzanne Kosmas, D-Fla., said the reopening of the facility is not only symbolic of our ability to move forward into the future, but also is very tangible evidence of what is being done at Kennedy, and the innovation and partnerships that are taking place. “I’m thrilled to be part of this movement as we go forward into this next phase,” Kosmas said. Richard Harris, Orion deputy program manager for Production Operations with Lockheed Martin, said the state’s investment is a win-win situation.

“The vision is being realized at KSC,” Harris said. “Today we celebrate our first goal -- facility project completed on schedule and under budget.”

The facility, once used to process space vehicles in the Apollo era, will serve as the final assembly and checkout facility for the Orion crew exploration vehicles, which includes the crew and service modules. Initial Orion production processing will begin with vehicle mock-ups later this year.

Construction contractor Hansel Phelps Construction Co. of Orlando, Fla., was awarded the contract by Lockheed Martin in June 2007. Workers replaced everything in the 70,000-square-foot high bay and the 20,000-square-foot basement, except the basic structure. A tour of the facility revealed new walls, ceilings, paint, air conditioning, wiring, a new state-of-the-art heavy lift crane and specially- designed epoxy flooring. Participants also were able to view mock-ups of the Orion capsule and a heat shield. Total renovation costs were about $55 million.

U.S. Rep. Bill Posey, R-Fla., said that one of the things this country is universally, undeniably respected for around the world is the nation’s space program.

“A big part of my job is to continue to work with our governor, our legislature, our colleagues in Congress, our county officials, NASA, the Air Force and Space Florida to absolutely guarantee that we’re going to remain No. 1 in space,” Posey said. Linda Herridge
Kennedy Space Center
› Back To Top