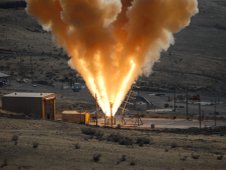 The abort motor will provide a half-million pounds of thrust to lift the crew module off the Ares I rocket, pulling the crew away safely in the event of an emergency on the launch pad or during the first 300,000 feet of the rocket's climb to orbit. Thursday's firing was the first time a motor with reverse flow propulsion technology at this scale has been tested. It also is the first test of its kind since the beginning of the Apollo Program.

"This milestone brings the Constellation Program one step closer to completion of the Orion vehicle that will carry astronauts to the International Space Station in 2015 and return humans to the moon by 2020," said Mark Geyer, Orion project manager at NASA's Johnson Space Center in Houston. "The launch abort system must be ready to operate in many different environmental conditions, and tests such as this one are critical to assure this safety feature will protect our astronauts."

Thursday's test firing was the culmination of a series of motor and component tests conducted this year in preparation for the next major milestone, a test scheduled for the spring of 2009 with a full-size mock-up of the Orion crew capsule.

The abort motor stands more than 17 feet tall and is three feet in diameter. During Thursday's ground firing, the motor was fixed in a vertical test stand with its four exhaust nozzles pointing skyward at ATK's facility.

On ignition, the abort motor fired for 5.5 seconds. The high impulse motor was developed to expend the majority of its propellant in the first three seconds, delivering the half million pounds of thrust needed to pull the capsule away from its launch vehicle in an emergency abort. 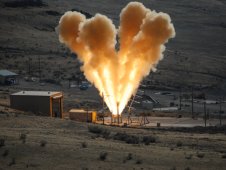 While similar to the Apollo Program's launch abort motor, Orion's abort motor incorporates today's technology into a more robust design. The launch abort motor uses a composite case and an exhaust turn-flow technology instead of a tower, which results in weight savings, improved performance and improved success in crew survival during an abort. Instead of the rocket plume exiting a rear nozzle, the manifold is placed at the forward end of the motor. The rocket thrust enters the manifold and is turned 155 degrees and forced out the four nozzles, creating a forward-pulling force.

ATK is the subcontractor responsible for the launch abort motor within NASA's Orion Project. Orbital Sciences Corporation in Dulles, Va., is responsible for integrating the launch abort system motor into the vehicle for Lockheed Martin Corporation of Denver, the prime contractor for Orion. The Orion Project Office is located at NASA's Johnson Space Center in Houston and receives management and technical support for the Launch Abort System from NASA's Langley Research Center in Hampton, Va., and NASA's Marshall Space Flight Center in Huntsville, Ala. Media contacts: Grey Hautaluoma/Ashley Edwards, 202-358-0668/1756
Jennifer Morcone 256-544-7199
Emily Outen 757-864-7022
› Back To Top