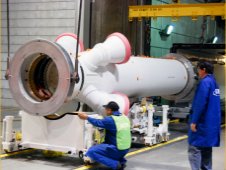 The launch abort system is designed to protect the crew onboard Orion by pulling the craft to safety in the event of an emergency on the launch pad or during the initial phase of ascent.

The Pad Abort 1 test will be the first full-scale test flight of the new system. The flight test will be conducted using a fully-integrated launch abort system, which includes the abort motor that first pulls Orion from danger, an attitude control motor to provide directional control, and the jettison motor to separate the system from the crew module. The test at White Sands will use a mockup of the Orion crew module. 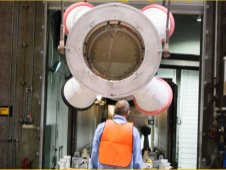 An engineer examines a segment of the Orion LAS motor. Image Credit: NASA/ATK

The main abort motor will ignite, producing over a half-million pounds of thrust within milliseconds to pull the Orion mockup from the platform. Once the crew module has been reoriented for landing, the launch abort system will be jettisoned and parachutes will slow the capsule’s descent to a safe landing.

The abort motor stands over 17 feet tall, measures three feet in diameter and is equipped with a unique reverse flow manifold that includes four head end turn flow nozzles. The manifold is placed at the forward end of the motor. Rocket plumes exit all four nozzles at 155 degrees, instead of straight out the aft end, creating forward thrust. The reverse flow manifold, which was designed to provide the necessary plume clearance between the system and the Orion crew capsule, is the first of its kind for a high-thrust rocket motor system on a U.S. human space flight vehicle.

In preparation for this test, a series of motor test fires and component tests have been conducted, including a full-scale abort motor test last fall. Following the PA-1 test flight, additional ground and flight tests for the launch abort system are planned over the next several years to support the first operational flight of Orion and Ares I.