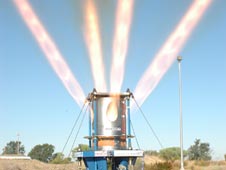 NASA completed a full-scale rocket motor test on Thursday, July 17, to further development of the Orion jettison motor, which will separate the spacecraft's launch abort system from the crew module during launch. Orion, the Constellation Program's crew exploration vehicle now under development, will fly to the International Space Station and be part of the spaceflight system to conduct sustained human exploration of the moon.

NASA and Aerojet successfully fired the jettison motor at the Aerojet facility in Sacramento, Calif. The demonstration is part of a series of developmental tests that pave the way for delivery of the motor to be used for the first full-scale test of the launch abort system at the U.S. Army’s White Sands Missile Range in New Mexico late this year.

Engineers will use the test firing to verify that the motor meets specification requirements and to help define induced acoustic, vibration and shock loads caused by the motor. The successful test firing of the jettison motor increases the technical readiness of the launch abort system and is the first full-scale rocket propulsion element qualified to proceed into a system-level demonstration. The test firing also verified that the system’s design criteria and manufacturing processes are in place.

This test and others like it are critical milestones in NASA's preparations for a series of flight tests of the full Orion abort system. The launch abort system will provide a safe escape for the crew in an emergency on the launch pad or during the climb to orbit.