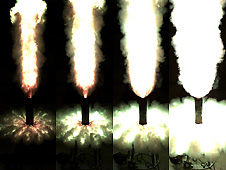 NASA and ATK performed an igniter test of the Orion Launch Abort System at ATK's Promontory Facility on June 13, which lasted for approximately 150 milliseconds. The igniter was just over 36 inches tall and was the first time the newly developed igniter had been tested. Its purpose is to ignite the primary motor on the LAS that pulls the capsule away during an emergency on the pad or during launch.
Credit: ATK

NASA and Alliant Techsystems, or ATK, reached another milestone Friday with the successful test firing of a critical safety component for the Orion crew exploration vehicle, NASA's next generation of spaceships.

A 36-inch-long (0.91 meter) igniter for the abort motor of Orion's launch abort system was fired at ATK's facility in Promontory, Utah.

Orion is part of the Constellation Program of spacecraft and systems NASA is building to carry astronauts to the International Space Station and conduct sustained human exploration of the moon.

The abort motor, the primary motor in the launch abort system, is designed to pull the crew capsule away from the Ares I launch vehicle in an emergency situation while on the pad or during the first 300,000 feet (91,440 meters) of ascent after launch.

In less than a second, the igniter generated approximately 21,000 pounds of thrust and produced combustion gas temperatures of more than 5,800 degrees Fahrenheit (3,204 degrees Celsius).

Engineers will use the test firing to evaluate the igniter's ballistic properties and pressure created inside its chamber. Preliminary data indicate the igniter performed as expected.

The motor uses a unique reverse flow technology with four nozzles mounted on the forward end. Once ignited, it will produce nearly a half-million pounds of thrust within milliseconds to pull the Orion crew module safely away from the Ares I rocket. 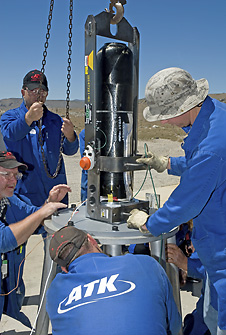 Friday's test was the first in a series of three igniter open air tests scheduled for 2008. A full-scale abort motor ground test will be conducted in September. In December, the entire Orion launch abort system will be demonstrated during a flight test at the U.S. Army's White Sands Missile Range in New Mexico.

The abort system is a key element in NASA's continuing efforts to improve safety as the agency develops the next generation of spacecraft to return humans to the moon.

For images of the test and more information about NASA's Constellation Program, visit: