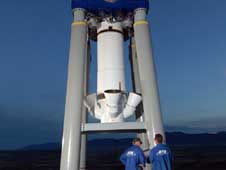 NASA and Alliant Techsystems, or ATK, have unveiled a new vertical test stand that will be used later this summer to support NASA's Constellation Program. The stand will be used to test fire the full-scale abort motor for the launch abort system, which will sit atop the Orion crew exploration vehicle. The abort motor is designed to pull the crew module away from the Ares I launch vehicle in an emergency situation on the launch pad or during the first 300,000 feet after launch.

A full scale inert motor, without oxidizer in the propellant, is now secured top end down in the test stand with its nozzles pointing skyward at ATK's facility in Promontory, Utah. Engineers will spend the next few months performing a final checkout.

"We're breaking new ground with the development of this critical motor, which must have sufficient thrust to leave the vehicle quickly and get the crew to safety," said Ted Kublin, who is the lead engineer for the propulsion abort motor at NASA's Marshall Space Flight Center in Huntsville, Ala. "The launch abort system is one of the most vital components of the Orion spacecraft, requiring innovative engineering to ensure success."

The abort motor stands more than 17 feet high and three feet in diameter and is equipped with four nozzles. The motor's specially designed manifold uses a reverse flow technology that forces hot gas through the manifold's four nozzles, creating a pulling force. The hot gas exits the top of the motor, allowing the resulting plume to clear the crew module. 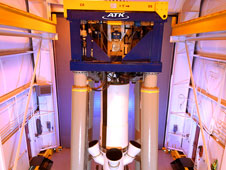 The vertical test platform for the full-scale abort motor allows the motor to be tested top side down with the nozzles pointing skyward. Image Credit: ATK View large image

A bench test firing of the abort motor's igniter assembly is scheduled to take place in early June. The igniter assembly is a small rocket motor inside the abort motor that provides the ignition source for the motor propellant. Once ignited, the motor propellant burns at a very high rate, resulting in four individual plumes that are more than three times the motor length. Total abort motor burn time is five seconds and creates a half-million pounds of thrust. However, the majority of the high impulse propellant will be expended in the first three seconds, which corresponds with the critical time frame for the Orion crew module to escape from any potentially life-threatening situation.

The abort system is a key element in NASA's continuing efforts to improve safety as the agency develops the next generation of spacecraft to return humans to the moon. NASA's Langley Research Center in Hampton, Va., manages the launch abort system design and development effort with partners and team members from Marshall. Langley's Launch Abort System Office performs this function as part of the Orion Project Office located at NASA's Johnson Space Center in Houston. Orbital Sciences Corporation of Dulles, Va., is building the entire launch abort system for Lockheed Martin Corporation of Denver, the prime contractor for Orion.

For images of the test stand and more information about NASA's Constellation Program, visit: