"Three...two…one…release!" shouts Scott Runnells, a NASA lead technician, prompting a 16,000 pound (7,257 kg) test apparatus to swing down to Earth from nearly 40 feet in the air. 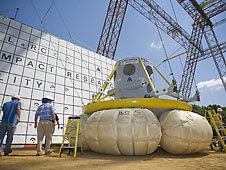 Now under development, Orion will be America's next crewed spacecraft, designed to fly to the International Space Station and be part of the space flight system to conduct sustained human exploration of the moon. While it is early in the design process and plans could change, NASA currently is working toward a splashdown landing for Orion.

The agency also is preparing for scenarios that could reroute the spacecraft during its return to Earth. In the event that a pad abort occurs -- and the crew module is rapidly propelled away from the Ares I rocket while still on the launch pad -- wind could catch Orion's parachutes in its descent and blow it back toward the shore.

"Although an unlikely scenario, the possibility of wind blowing Orion back to land from its intended water target during a pad abort can't be dismissed," Barry Bryant, project manager for the Orion Landing System Advanced Development Project, said.

For this reason, NASA is developing the contingency land landing system, which consists of two airbag assemblies called "leading edge airbags" that will wrap around the front edge of the Orion crew module. 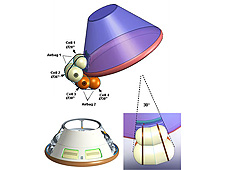 This scenario led to NASA's goal of developing a singular landing system that will work for both land and water landings. Since Orion's intended landing site is water, the spacecraft will descend at an angle in its return to Earth. With the design of the airbags, the contingency land landing system will support a touchdown on land even though Orion is coming down at an angle.

"If we have a contingency land landing system that has a low risk of injury, now whether you land on water or land, you've got the same low risk for the crew," Bryant said.

"Now the people that make the decision about how to reenter in the case of an emergency situation don't have to add the choice between land or water to their complex, critical thinking because they've got a vehicle that can land in either spot," he said.

Although in the beginning stages, preparations for the development of a contingency land landing system are progressing quickly.

While the airbag drop tests were originally planned to provide research for a nominal land landing, NASA engineers are using the demonstrations to prove out the design and the fabrication techniques that will be used on contingency land landing airbags.

After second generation testing wraps up this summer, tests specifically for the contingency land landing system will begin.

Airbag vendors Airborne Systems and ILC Dover are working together to build a full-scale prototype of the contingency land landing airbag assembly and to demonstrate an in-house deployment.

Following further designs of the airbag assembly, NASA will test a contingency land landing airbag at the 72-foot (22 m) Vertical Drop Tower and the 20-foot (6 m) Vertical Spin Tunnel at Langley. Engineers will subsequently conduct full-scale drop tests similar to demonstrations being performed today -- only this time they will use the newly-designed leading edge airbags.