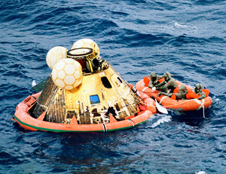 It was an extraordinary feat when Apollo engineers designed a spacecraft to go somewhere no human had ever gone before. Especially when that place was the moon - 240,000 miles from Earth. Now forty years after the first moon landing, NASA has turned its attention back to lunar missions, this time planning to stay longer.

The spacecraft to carry future explorers to the moon, the Orion crew exploration vehicle, looks very similar to the Apollo spacecraft. The crew module borrows the familiar conical shape with a curved heatshield, which has proven to be the optimal shape for missions returning from the moon.

Additionally, Orion and Apollo both use the same heat-resistant thermal material, called AVCOAT, to shield the capsules from heat generated by the 25,000 mile-per-hour atmosphere re-entry from missions to the moon.

However, the Orion crew module is one-third larger than the Apollo command module and the inside will be different. Engineers will incorporate advances in technology into the interior and since the plan for missions to the moon is different, different types of systems are being designed also.

When Apollo astronauts visited the moon, they only stayed for a few days at a time, three astronauts traveled to lunar orbit on Apollo, and then only two descended to the moon’s surface.

When America returns to the moon, four astronauts will ride in Orion to lunar orbit and then all of them will move into the Altair lunar lander to go explore the moon. Orion will operate on its own in lunar orbit, standing by for the return trip to Earth.

Orion will start out supporting week-long missions and then will be able to support up to 210-day missions when astronauts eventually live and work at outposts on the moon. 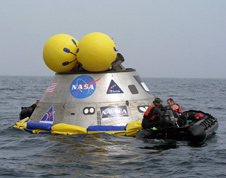 Members of the 920th Rescue Wing work on a mockup Orion crew exploration vehicle off the coast of Port Canaveral, Fla. The goal of the Post-landing Orion Recovery Test, or PORT, is to determine what kind of motion astronauts can expect after landing, as well as outside conditions for recovery teams. Image credit: NASA

Being able to operate autonomously in lunar orbit will be a key factor in Orion being able to support longer missions. Its systems will operate automatically, with Mission Control watching from Earth, while the crew explores the moon.

By going to the moon for extended periods of time, astronauts will search for resources and learn how to work safely in a harsh environment -- stepping stones to future exploration. The moon also offers many clues about the time when the planets were formed.

To support longer missions, Orion also will have larger tanks to carry the fuel for course adjustments during the trip and will use advanced solar array technology to collect sunlight for conversion into electricity. Apollo used fuel cell technology (as does the space shuttle), which requires oxygen and hydrogen be carried along for the ride. Using solar arrays saves weight that can be used to enhance safety and launch more cargo.

Orion will have more power, too. It will hold six batteries for power storage and will use a 120V DC power distribution system, compared to Apollo’s three-battery storage and 28V DC system.

Orion’s crew module will feature a streamlined glass cockpit interface for the astronauts, with about ten times fewer switches than Apollo’s roughly 450 switches.
› Back To Top