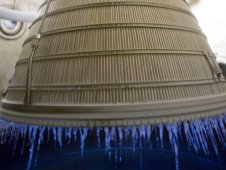 A technology development engine that may help NASA safely return astronauts to the lunar surface has successfully completed its third round of testing. The goal of these tests is to reduce risk and advance technology for a reliable and robust rocket engine that could enable America's next moon landing.

The tests by Pratt & Whitney Rocketdyne in West Palm Beach, Fla., helped to gather data on this concept engine that might play a role in the next stage of human exploration of the moon. Most rockets make spacecraft travel faster. The goal of a lunar lander descent engine is to slow the vehicle so astronauts can land safely.

The Common Extensible Cryogenic Engine, or CECE, is a deep-throttling engine, which means it has the flexibility to reduce thrust from 100 percent down to 10 percent -- allowing a spacecraft to gently land on the lunar surface. The 13,800-pound thrust engine uses extremely cold liquid oxygen and liquid hydrogen as propellants.

During the test, the engine was successfully throttled from a high of 104 percent of the engine's potential down to eight percent, a record for an engine of this type. A cryogenic engine is needed to provide high performance and put more payload on the surface of the moon. The CECE demonstrator has evaluated two engine configurations during three rounds of hot-fire testing.

"The first test series in 2006 was a challenge but showed promise," said Tony Kim, Deep Throttling Engine project manager at NASA's Marshall Space Flight Center, Huntsville, Ala. "Testing in 2007 provided an in-depth examination of low-power-level throttling and engine performance characteristics. This third cycle we actively addressed and found solutions to the challenges we faced."

The team carefully assessed test results that showed pressure oscillations in the engine at lower throttle levels called "chugging." Chugging may not be a concern for the engine itself, but the resulting vibrations could have the potential to resonate with the structure of the rocket and cause problems for the lander or crew.

The CECE is based on the existing Pratt & Whitney Rocketdyne RL10 upper stage rocket engine. Previous first-hand flight experience, as well as this data, will allow engineers to develop simulation models that can focus testing for efficiency and effectiveness.

The CECE collaboration includes engineers from Marshall, NASA's Glenn Research Center in Cleveland, and Pratt & Whitney Rocketdyne. NASA has invested in CECE technology since 2005 as part of the Propulsion and Cryogenics Advanced Development project at Glenn. The project is funded by the Exploration Technology Development Program in NASA's Exploration Systems Mission Directorate.