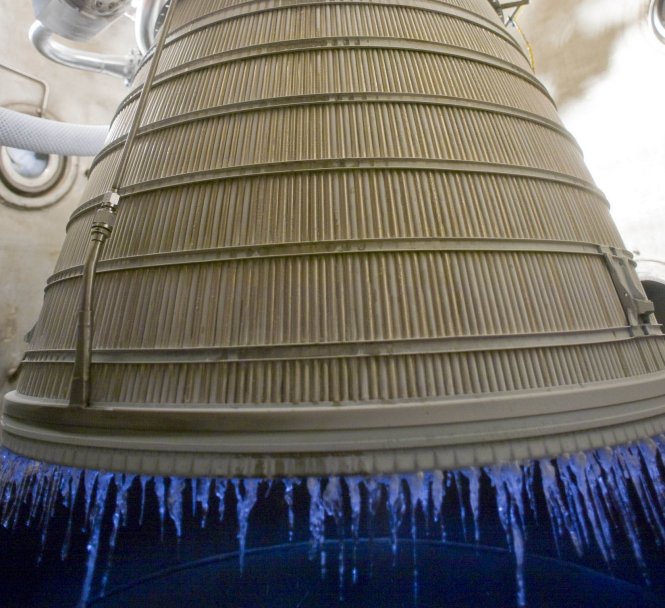 How can a rocket engine that generates 5,000 degree steam and 13,800 lbs of thrust form icicles at the rim of its nozzle? It's cryogenic. The Common Extensible Cryogenic Engine, CECE for short, based on the design of the heritage Pratt & Whitney Rocketdyne RL10 engine, has completed its third round of intensive testing. This technology development engine is fueled by a mixture of minus 297F liquid oxygen and minus 423F liquid hydrogen. The engine components are super-cooled to similar low temperatures. As the CECE burns its frigid fuels, gas composed of hot steam is produced and propelled out the nozzle creating thrust. This high speed, hot gas mixture is essential for propulsion. The steam is cooled by the cold engine nozzle, condensing and eventually freezing at the nozzle exit to form icicles. Using liquid hydrogen and oxygen in rockets will provide major advantages for landing astronauts on the moon. Hydrogen is very light but enables about 40 percent greater performance (force on the rocket per pound of propellant) than other rocket fuels. Therefore, NASA can use this weight savings to bring a bigger spacecraft with a greater payload to the moon than with the same amount of conventional propellants. CECE is a step forward in NASA's efforts to develop reliable, robust technologies to return to the moon -- and a winter wonder.

> View large image
› Back To Top