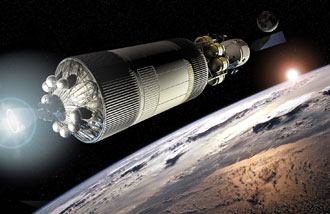 NASA's Constellation Program is getting to work on the new spacecraft that will return humans to the moon and blaze a trail to Mars and beyond. Thousands of people across the agency are pulling together to meet this challenge, with work assignments that will sustain ten healthy and productive centers.

Each NASA center is playing a vital role in making the Vision for Space Exploration a reality:

They're also leading the development of the Lunar Crater Observation and Sensing Satellite, which will launch with the Lunar Reconnaissance Orbiter in 2008 and crash into the lunar south pole to search for water ice.+ Read More 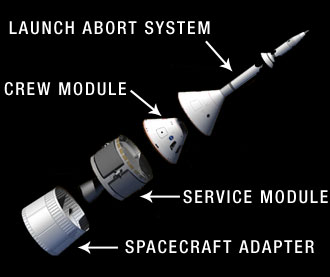 Glenn Research Center, Cleveland
Glenn will manage the work on the CEV's service module, which will provide maneuvering with its propulsion system, generate power using solar arrays, and keep the vehicle cool with heat rejection radiators. Glenn is also the lead for the upper stage of the Crew Launch Vehicle.
+ Glenn Center Site

Goddard Space Flight Center, Greenbelt, Md.
Goddard has responsibility for communications, tracking and support mechanisms for the CEV. The center will also continue its work on the Lunar Reconnaissance Orbiter mission, set to launch in October 2008.
+ Goddard Center Site

Johnson Space Center, Houston
Johnson, home to NASA's astronaut corps and mission control, is managing the Constellation Program. The center will integrate the CEV, Crew Launch and Cargo Launch Vehicles for all mission operations. JSC is the lead for the crew module, and will provide flight operations support to the Crew Launch Vehicle. As with Shuttle program and Apollo before, JSC will plan missions, train crews and run mission control.
+ Johnson Center Site 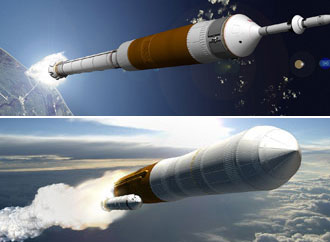 Stennis Space Center, Miss.
By building on more than 40 years of experience in rocket propulsion testing, Stennis will continue to serve in its traditional test role, serving as the integration lead for all propulsion testing. The first rocket engine to be tested will be the J-2X, an engine similar to those tested at the center 40 years ago for the Apollo Saturn V rockets. In the Constellation Program, the J-2X will be used to power the Upper Stage of the Crew Launch Vehicle.
+ Stennis Center Site