Well Suited for Space
At the bottom of NASA’s 40-foot-deep swimming pool – known as the Neutral Buoyancy Lab – astronauts strap on weights and plastic piping to simulate the backpack that attaches to a spacesuit. Then they walk, hop, run, climb and shovel. And then they rate the difficulty of each task with each particular weight and each backpack design. One is too heavy, another is too light. One backpack is too low, another too high. 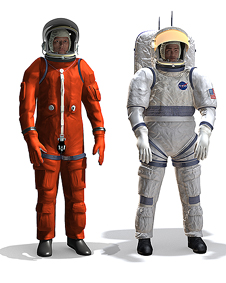 Engineers working to design a new spacesuit for the Constellation program have come up with a suit system that consists of two basic designs, or configurations, that will be used for different tasks. The orange suit in the illustration is Configuration One, which will be worn during launch, landing and -- if necessary -- sudden cabin depressurization events. It will also be used if a spacewalk must be performed in microgravity. Configuration Two, the white suit, would be used during moonwalks for lunar exploration. Since Configuration One will be used in and around the vehicle only, it does not need the life support backpack that Configuration Two uses -- instead it will connect to the vehicle by umbilical for oxygen, cooling water, power and communications links. Configuration Two, meanwhile, will include more hard metal elements in joint areas, which will provide the mobility necessary for surface exploration. Image Credit: NASA.
+ View hi-res image

It's kind of a space-age Goldilocks story, with the goal, of course, of finding the design that's just right.

It’s been two decades since the spacesuit of the shuttle era was designed – a 300-pound personal spaceship built to work in weightlessness and protect astronauts from the vacuum, searing heat and freezing cold of space. It’s done its job well, but it’s not made for the moon.

For one thing, today’s suit is too heavy for the partial gravity of planetary exploration. It’s built for astronauts who will be working with their hands and floating, not walking, riding, climbing and digging. And since it’s only meant to be worn on spacewalks, astronauts wear other suits for launch and landing. That takes up precious space on a small ship.

In other words, NASA needs a new suit.

So, engineers and scientists at the Johnson Space Center in Houston are designing a spacesuit for the Constellation Program – the program that is building the next human spacecraft for America, a craft that will fly to Earth orbit, to the moon and beyond. Imitating the moon on Earth to find the best design means going to great lengths – suspending astronauts from the ceiling; sending them 40 feet down and 34,000 feet up; traveling to the bottom of the ocean and to the desert of Arizona. And that’s in addition to the work done in conventional laboratories at Johnson and other NASA centers.

“The suit’s made up of a bunch of different components,” said Scott Cupples, the Constellation spacesuit element lead. “It takes a lot of coordination. We’re looking at each little thing and trying to decide how we can do it better.”

Though NASA has only been actively planning to return to the moon since 2004, engineers actually began looking at this problem more than 10 years ago, with the first Desert RATS – or Research and Technology Studies – trip. Since 1997, scientists and engineers from NASA centers across the country have gathered annually in the Arizona desert, in some of the same places Apollo astronauts trained for lunar missions, to simulate the kind of activities astronauts might need to do when exploring the moon or Mars.

"You can sit behind a computer and dream up requirements and corresponding design approaches, but you've got to put them into action to see if they are feasible,” said Joe Kosmo, a senior project engineer who started the group and has worked on every United States spacesuit since the Gemini program. "Remote work – field testing – helps with that."

With lessons learned from the Apollo program in mind, a small Desert RATS team started by having a geologist in street clothes do regular geological work while they studied his movement. Since then, geologists and other suit subjects have worn spacesuits while collecting stand-in moon rocks, doing site surveys and driving a lunar rover.

“One of the major reasons we’re going to the moon is geology,” said Terry Hill, engineering project manager for the new suit. “So if you can’t bend down in the suit, you’ve missed the boat.”

The work done on Desert RATS gave engineers some idea of where to start, but it left a whole host of details to iron out – which is where tests like those in the Neutral Buoyancy Laboratory come in. The NBL tests were aimed at finding the ideal weight for the new suit and the “sweet spot” for its center of gravity. Normally, your center of gravity is somewhere around your belly button. But that changes when you put on a 100-plus-pound backpack carrying your life support system.

“Some people think that the center of gravity on the Apollo suits was why the astronauts fell down so much,” said Jeff Patrick, integrated testing and facilities manager.

So astronauts tried out different backpack possibilities in the pool to see which felt the most natural. They even practiced getting up after a fall to see how easily it could be done. It’s an extension of what astronauts do 62 feet below the ocean’s surface during NEEMO missions – NASA Extreme Environment Mission Operations. On those missions, where underwater "spacewalks" are staged from a habitat off the Florida coast, astronauts face many of the same limits and safety concerns they would encounter in space. They’re finding that the typical backpack design might not work as well as something more the size of a fanny pack worn on the back.

“We’ve been pretty successful so far,” said Nick Skytland, deputy project manager for the EVA Physiology, Systems, and Performance Project. “Initial results from our research are already being incorporated into the design of the next generation spacesuit.” 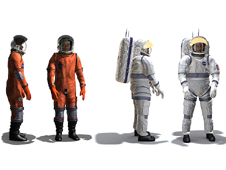 Though they look very different, the two suits will also have some common elements -- such as the helmet and the gloves -- that will save weight and space in the crew exploration vehicle and, over time, money. Image Credit: NASA.
+ View hi-res image

Some of the same activities – and more – are also done on dry land and even 34,000 feet in the air. In NASA’s reduced gravity airplane, which flies in parabolas to give passengers a few seconds of weightlessness, astronauts and engineers get a real feel for how the suit performs in reduced gravity. On the ground, they use the POGO – a device that suspends a person wearing a spacesuit from the ceiling. By supporting five-sixths of a person's weight, it mimics the one-sixth gravity of the moon. The contraption has been around since the Apollo days – in fact, the device gets its name from the way Apollo astronauts tended to bounce when suspended from it.

Using the POGO, engineers can test things like how far an astronaut could walk in the spacesuit if their lunar rover broke down and they had to hike back to their base. They can experiment with different suit pressures and weights while monitoring heart rates, temperatures and metabolic outputs.

Mike Gernhardt, an astronaut who has also been the principal investigator for many of the tests involved in the design process, said one thing they’ve noticed is that at lunar gravity astronauts can get more mileage out of their oxygen if they go faster. Probably due to the momentum of the suit – it takes less work to go faster, so you use less oxygen while doing so. But you also put off more heat. More heat, in fact, than the conventional suit is able to get rid of. Which means that, to take advantage of the added mileage, the new suit needs a better cooling system. It’s one more piece of the puzzle engineers and scientists are carefully putting together.

When all the pieces fall into place, the astronauts of the Constellation program will have a spacesuit that fits their needs. But what the suit needs to do has to be balanced with the fact that it must be built within the size and weight available to hold it on the Orion spacecraft in which it will fly. It also may be asked to pull double duty as the crew’s launch and entry suit. Serving that need means it must be able to withstand any of the extreme environments the crew might encounter during an emergency landing – extreme hot or cold, or even a water landing – in addition to those encountered on the moon and in space.

All that, and it needs to be easy to use.

“The No. 1 driver that we need to have on the new suit is an improved work efficiency index,” Gernhardt said. “Right now we’re basically spending three hours inside the spacecraft getting the suits ready to go out for every one hour we spend outside. As we get into this whole lunar exploration phase, we’re going to be doing an order of magnitude more spacewalks than we’re doing in the space station, and we simply cannot afford all of that overhead.”

The goal, Gernhardt said, is to reverse the ratio. He wants astronauts to spend no more than one hour getting ready, for every three hours outside – that’s two hours spent preparing for a six-hour moon walk, rather than 18. It’s a tall order, but he says it can be done.

“Right now, the suit that we have is in all these pieces, and they’re stored in different places,” he said. “You have to pull out a different kit for your biomedical sensors, and there are three different kinds of tape and kinds of gel that you use to attach them, and all of that takes 30-plus minutes just to install. In the new suit, we’re going to consider having non-contact sensors that are built into the liquid cooling garment – where it takes no time.”

There’s a half hour or more saved right there. More examples: the designers hope to shave another half hour by eliminating the need for astronauts to fill the suit’s water bag, which involves a special tool and a lot of time spent getting rid of bubbles. And another two hours can be gained by keeping the habitat the astronauts live in at a pressure low enough to eliminate the need for long pre-spacewalk activities that must be done today to avoid decompression sickness during spacewalks from the shuttle.

“All these things add up,” Gernhardt said. “It’s going to make it so much more efficient to get out the door. My vision is that we have a suit that is a pleasure to work in – that it could be such low overhead that there might be days where it’s your day off and you choose to go outside on a pleasure moonwalk, not just a working moonwalk.”
› Back To Top