Astronauts to Ride Rails in Emergency
As NASA revamps Launch Complex 39B to host the new Orion spacecraft and Ares I rocket of the Constellation Program, engineers are preparing to install a new kind of departure system to evacuate astronauts.

The agency calls it the Orion Emergency Egress System, but it is fundamentally a group of multi-passenger cars on a set of rails reminiscent of a roller coaster. Its purpose is to move astronauts and ground crew quickly from the vehicle entry on the launch pad to a protective concrete bunker in case of an emergency. 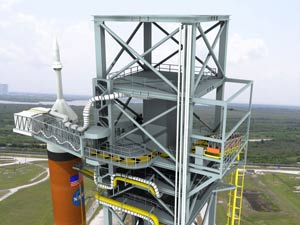 Image right: An artist's concept of the Ares I launch pad shows the new evacuation system on the right. Astronauts and ground crew could leave the capsule and ride a rail car to a bunker for protection. The path would be marked with yellow and black arrows. Credit: NASA
+ View Hi-Res Image

Similar systems have been built into launch pads since the Saturn rockets and for the space shuttle. Both earlier systems were cables running from the spacecraft’s crew ingress level to an area near a bunker. There has never been an emergency on the pad that required the crew use these systems.

For Orion, the rail car would stand some 380 feet above the ground. It will be at the same height as the hatch on the Orion capsule, which is where the astronaut crews enter the spacecraft before launch.

Kelli Maloney, the lead designer for the launch pad escape system, said a trade study showed the railcar best met NASA's requirements. Those requirements call for astronauts to be able to get out of the spacecraft and into the bunker within 4 minutes.

One of the benefits of the rail system, Maloney said, is that the track can take the astronauts directly to the bunker door. That would be a big help if one of the crew members or a ground crew member was incapacitated.

"It's obviously not a thrill ride, but we're taking advantage of technology that's there," he said.