Exhaling for Exploration: Scientists Test Lunar Breathing System
Imagine yourself hip-to-hip, shoulder-to-shoulder, inside a room the size of a walk-in closet for eight hours with five people you just met. Does that make you sweat? Or maybe make your breathing a little more animated? 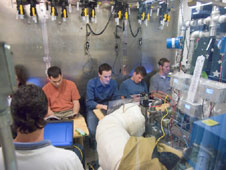 Volunteers were bolted inside a test chamber and sweated for NASA scientists at Johnson Space Center in Houston to test a new system being developed for future space vehicles. The system, known as the carbon-dioxide and moisture removal amine swing-bed, or CAMRAS, is designed to make air breathable and the living space more comfortable by controlling carbon dioxide and humidity inside a crew capsule. Image Credit: NASA.
+ View hi-res image

For three weeks, 23 volunteers dedicated time to do just that -- sweat and breathe -- inside a test chamber so NASA scientists at Johnson Space Center in Houston could measure the amount of moisture and carbon dioxide absorbed by a new system being developed for future space vehicles. The system is designed to control carbon dioxide and humidity inside a crew capsule to make air breathable and living space more comfortable.

The tests, which took place from April 14 to May 1, are some of the first to use human subjects in support of NASA's Orion crew capsule, Altair lunar lander and lunar rovers.

"We're moving from paper studies to tests with hardware that will evolve and become part of the spacecraft that will fly back to the moon," said test volunteer and NASA engineer Evan Thomas at Johnson.

Known as the Carbon-dioxide and Moisture Removal Amine Swing-bed, or CAMRAS, the Exploration Life Support project within NASA's Exploration Technology Development Program is developing the new system. The program is investigating technologies that will help sustain life on exploration vehicles and reduce the dependence on resupply from Earth.

"Our goal for CAMRAS is to develop a simple, regenerative, lightweight device that will work for both the Orion crew capsule and the Altair lunar lander," said lead researcher Jeff Sweterlitsch.

Testing on the device began more than a year ago with machines used to create humidity and carbon dioxide in the test chamber. The tests proved the system worked well, but the machines could not generate the wide variety of metabolic loads -- amounts of energy the body's chemical reactions produce to maintain life -- that humans create. 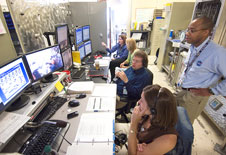 This series of tests put volunteers inside a test chamber scaled to be the size of the Orion crew capsule, about 570 cubic feet. The volunteers, who were selected and grouped to replicate a typical crew, were asked to sleep, eat and exercise during test sessions that lasted from a few hours to overnight.

"The air smelled a little artificial, like on a plane, and it was a little crowded," said Aaron Hetherington, one of the volunteers and a director for the test. "But the air was fine; the temperature comfortable. My biggest observation is that it was unremarkable, which is good because that means the hardware was working."

Two additional phases of testing on CAMRAS are planned.

The CAMRAS absorption beds are regenerated by the vacuum of space, and processing the carbon dioxide and moisture requires little energy. CAMRAS uses an organic compound known as amine that absorbs the carbon dioxide and water vapor from the cabin's atmosphere. The system then vents the two waste products overboard, and the vacuum of space regenerates the amine to work again.

+ View video of CAMRAS test
› Back To Top