Kennedy Prepares to Host Constellation
The Ares rockets that will take over for the space shuttle and carry humans to the moon are closer to lifting off from the drawing board.

Designs and modifications are under way at Launch Pad 39B, the Launch Control Center and the Vehicle Assembly Building at NASA's Kennedy Space Center in Florida to accommodate the first test flight of an Ares I rocket in April 2009. 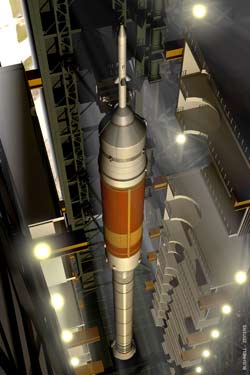 Image right: The Vehicle Assembly Building will stack the Ares rockets and Orion capsules. It is a familiar role for the building. It did the same work for the Saturn V moon rockets and the space shuttles. The Ares I rocket will be assembled in high bay 3. Credit: NASA
+ View Larger Image

It is all part of a plan to use rockets based largely on technology proven in the Space Shuttle Program as the foundation for America's next generation of crewed spacecraft. One rocket, the Ares I, will pick up where the shuttle leaves off as America’s prime vehicle for launching humans. The other, Ares V, will launch everything else needed for trips to the moon.

The demonstration rocket for the 2009 test, Ares I-X, will look just like the rocket that will launch astronauts to the International Space Station in the next decade and on the first leg of trips to the moon beginning in 2020.

The test flight calls for a surplus shuttle solid rocket booster to be topped with an inactive fifth segment, a non-working upper stage and a boilerplate capsule built to the dimensions of the Orion spacecraft that will carry humans to Earth orbit.

But for the 2009 test flight, the capsule will carry only instruments and will launch on a ballistic trajectory into the South Atlantic Ocean. This will allow engineers to study the conditions Ares I will experience at liftoff, while the solid rocket is thundering toward space and when the second-stage rocket and spacecraft separate.

A second unmanned test flight with higher fidelity upper stage and Orion spacecraft simulators is planned for 2012. The first crewed flight of Ares I and Orion is scheduled for no later than 2015.

Although the rocket is a new design, NASA is following a plan that allows the agency to use many facilities that already exist.

"The infrastructure we have for shuttle is mainly what we're going to use," said Pepper Phillips, manager of Kennedy's Ground Operations Project in the Constellation Program.

Constellation encompasses the Ares rockets and the Orion capsules under development, as well as the lunar landers and surface systems that will be used by astronauts exploring the moon. 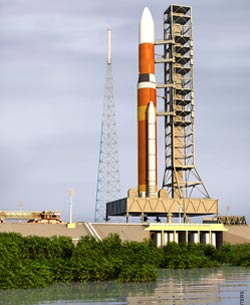 Image left: The Ares V is the cargo rocket for Constellation. It is comparable to the Saturn V and is to carry a large upper stage and lunar lander so astronauts can return to the moon. Credit: NASA
+ View Large Image

Here is a detailed look at the changes already under way around Kennedy to get ready for that test flight. It also is a look ahead at what needs to be done so the Constellation Program can begin Ares I crewed missions, as well as Ares V missions beyond 2015.

Role in Constellation: Launch complex for the Ares I-X and operational flights of the Ares I rocket.

Status: Launch Pad 39B has hosted its last planned space shuttle launch, though it will be kept ready in case an emergency flight is called for during the last Hubble Space Telescope repair mission in September 2008. Then major work will begin.

To be done: The fixed and rotating service structures standing at Launch Pad 39B will be dismantled sometime after the Ares I-X test flight. A new launch tower for Ares I will be built onto a new mobile launch platform.

For the test scheduled in 2012 or for the crewed flights, workers and astronauts will need access to the highest levels of the rocket and capsule. When the Ares I rocket rolls out to the launch pad on the back of the same crawler-transporters used now, its launch gantry will be with it. The mobile launchers will nestle under three lightning protection towers to be erected around the pad area. 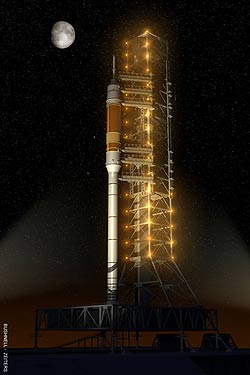 Image right: Launch Complex 39-B will launch the Ares I rockets, which will carry astronauts into space inside Orion capsules. Credit: NASA
+ View Larger Image

Kennedy's Constellation managers say the Ares' time at the launch pad will be significantly less than the three weeks or more the shuttle requires. This “clean pad” approach minimizes equipment and servicing at the launch pad. It is the same plan NASA used with the Saturn V rockets and industry employs it with more modern launchers.

The launch pad will also get a new emergency escape system for astronauts, one that looks very much like a roller coaster. Cars riding on a rail will replace the familiar baskets hanging from steel cables.

Role in Constellation: Launch Pad 39A will be the home of the Ares V rocket, a behemoth vehicle almost as tall as the Saturn V, and even more powerful. The Ares V will not carry a crew, but is slated to loft a lunar lander and a fueled upper stage that will connect with an Orion capsule in Earth orbit. The upper stage from the Ares V will ignite to send the Orion and lander toward the moon.

Status: The launch complex that saw the liftoff of Apollo 11 to the moon will be used for the space shuttle until the orbiters are retired around 2010.

Role in Constellation: The giant hangar used to stack the Saturn V rocket and space shuttles will retain that role in the Constellation Program. It is the only structure at Kennedy tall enough to accommodate the Ares rockets.

Status: The building's high bay 3 is undergoing minor changes to handle the Ares I-X rocket. The new vehicle is about 150 feet taller than the shuttle orbiter, so bigger changes will be needed for the final Ares I design. Work platforms similar to those used in Apollo will give workers the access they need to stack the pieces and process the rocket for launch.

To be done: After the shuttle fleet retires, high bay 1 will be converted to handle the mammoth Ares V rockets. Cranes that assembled the last rockets destined for the moon will again be used to attach pieces for a moon ship. 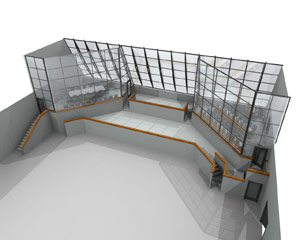 Image left: The Launch Control Center is being designed to use fewer launch controllers than previous space launches. Firing Room 1 is being rebuilt to support the systems required for the Ares rockets and Orion spacecraft. Credit: NASA

Status: The expansive room inside the Launch Control Center is gutted and the windows on the doors are papered over. It won't stay that way for long, though, because NASA wants members of its launch team to begin practicing with the new equipment and procedures in summer 2008.

About that launch team: While it takes more than 200 people in the Launch Control Center at Kennedy to launch a space shuttle mission, Phillips said the Ares launch team is targeted to number fewer than 50.

"This vehicle is far less complex than a shuttle system," Phillips said. "We recognize it's a less complex vehicle, so we're looking to use a simpler launch control system."

Role in Constellation: The Assembly and Refurbishment Facility processes the nosecones and aft skirts of the shuttle solid rocket boosters before they are bolted onto the fueled segments. The Ares 1 doesn't require a booster nosecone, but the aft skirt for the test flight is already being prepped.

Status: Engineers are modifying the aft skirt so it can behave a bit differently as the main booster for the Ares I. C.J. Smith of United Space Alliance noted the small rockets that push a booster away from a shuttle during launch will be used to help separate the upper stage from the solid rocket after the first part of the flight.

Role in Constellation: Parachutes will allow controlled returns to Earth for both the Orion capsule and the Ares I solid rocket booster. The refurbishment center is getting the first parachutes of the program ready and will overhaul them for reuse.

Status: Parachutes are already being stitched for upcoming drop tests in Yuma, Ariz.

Role in Constellation: NASA will stick with mobile launch platforms throughout the Constellation Program, the same concept it has used since the Saturn V. Earlier rockets were small enough to be assembled at the pad. For the 2009 test flight, workers will modify one of the three existing launch platforms to handle the Ares I stack. The 2012 test flight and subsequent launches will use a new mobile platform design. 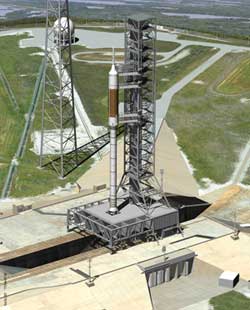 Image right: The Ares I rockets will be rolled to the launch pad on new platforms specifically designed for the new rockets. The new platforms will hold the launch tower and most of the equipment needed for a launch. Credit: NASA
+ View Larger Image

Status: NASA has awarded a contract to Reynolds, Smith and Hills Inc., located at Merritt Island, Fla., for the design of a new mobile launcher structure dedicated to the Ares I. The platform will hold the rocket and the service structure.

The work of the crawler-transporters is far from finished. After hauling Saturn Vs to the launch pad during Apollo and Skylab and carrying space shuttles back and forth from the Vehicle Assembly Building to the launch pads for almost 30 years, the crawlers are nowhere near retirement. The vehicles are planned to carry the new rockets, launch platforms and service gantries to the launch complexes.

Status: There are no major overhauls planned for the beefy vehicles, but they will need a little more muscle in the form of reinforcement to carry the Ares rockets. NASA is working to use the crawlers “as-is” for Ares I, but the Ares V will require more carrying capacity. Phillips said studies are ongoing to determine exactly how much work the crawlers will need.