Generation Constellation Learns about Apollo 13
Houston wasn't the only place on Earth with a problem after an oxygen tank exploded on the Apollo 13 spacecraft.

The mishap brought attention to things that can go wrong at Kennedy Space Center, too -- and what can be done quickly to fix them. 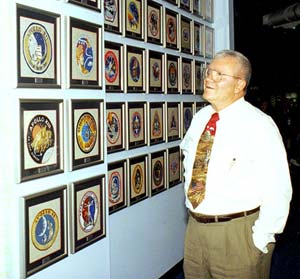 Image right: Fred Haise was one of three astronauts fighting to return to Earth during the Apollo 13 mission. He told engineers designing the next moon craft not to forget the lessons of the mission, mainly to make the space vessel hearty enough to handle surprises. Photo: NASA
+ View Hi-Res Image

Avoiding such problems in the future was the goal of a panel of experts who nursed the stricken Apollo 13 capsule back to Earth. The discussion was assembled by Kennedy's Engineering Academy and took place Aug. 30 at the center.

Speaking to some of the engineers developing the Orion spacecraft and Ares rockets of the Constellation Program, the group gave its account of working through the perilous Apollo 13 mission and what they learned from it.

Bob Sieck, the former space shuttle launch director, was a test engineer for the command and service modules when Apollo 13 launched. He said the oxygen tank that eventually exploded offered a series of signals before launch that engineers missed at the time.

"There were opportunities to listen to (the hardware)," Sieck said. "It reinforced the attention to detail." 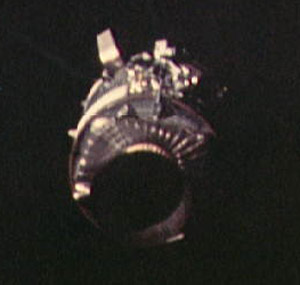 Apollo 13 astronaut Fred Haise, who took part from Johnson Space Center in Houston, credited numerous improvements in the Apollo spacecraft with giving the crew a vehicle that could successfully weather a near-catastrophe.

For example, when the temperature dropped, water condensed throughout the wiring and circuits of the command module, but the miles of wires did not short out.

"We were saved, I'm guessing, by the Apollo 1 fire," Haise said.

The capsule had been extensively redesigned and rebuilt after a fire during a routine launch pad test of the spacecraft at the launch pad. Frayed wiring was blamed for sparking the fatal blaze.

Ernie Reyes, chief of the Preflight Operations Branch during the Apollo Program, said NASA was blessed during Apollo 13 with a wide network of agency and contractor experts that stretched across the country. Tapping into that network, which was much more vast than depicted in the Hollywood account of the mission, was critical to saving the crew, he said.

"Our main concern that had never, ever happened to us before was that we had three lives at stake," Reyes said. "We said, 'Keep notes, we'll do the paperwork later.' " 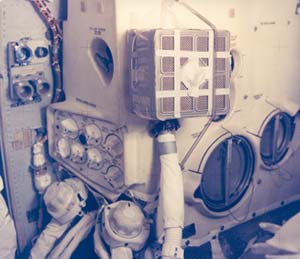 Image right: The Apollo 13 crew, working on designs from NASA and contractor engineers, made a filter box that scrubbed carbon dioxide from the air inside the spacecraft. Photo: NASA + View Hi-Res Image

The damaged spacecraft forced engineers throughout NASA to reconsider what could be done, particularly how far the lunar module could be pushed as a lifeboat to save the three men from disaster.

"The lunar module was doing something it was never designed to do," said panelist Bud Reynolds, who was the section chief of Apollo Flight Control Systems at Kennedy.

The success became a symbol of what NASA and its contractors could handle in an emergency.

"That mission had a series of things that at first glance looked insurmountable," Reynolds said. "You've got to try, that's all I can say."

The last piece of advice to the Constellation group was universal: keep it simple.

"Give (the crew) the tools they need to be successful, but don't overcomplicate the vehicle they are going to fly," Sieck said. "Fred (Haise) went to the moon with one computer that had less computing power than the Blackberry many of you have in your pocket."