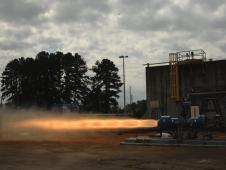 With a loud roar and a bright flash, engineers at NASA's Marshall Space Flight Center in Huntsville, Ala., successfully completed the first round of development testing for the ullage settling motor -- a critical element of the Ares I rocket. The Ares I is the first rocket under development for NASA's Constellation Program, a program tasked with the development of vehicles necessary to carry explorers on future journeys of exploration.

The hot-fire test -- the second in this series of development tests -- was conducted Oct. 8 at Test Stand 116 in the Marshall Center's East Test Area. All test objectives were met, bringing NASA one step closer to developing America's new space transportation system.

"The success of today’s test is an important step in the continuing development of the elements necessary to successfully launch the Ares I rocket," said Craig McArthur, acting upper stage manager for Ares Projects at Marshall. "While this is a relatively small motor, at only 9 inches in diameter and 47 inches in length, it will play a major role by ensuring safe and successful flights for the Ares rocket."

The word "ullage" is derived from the French word "ouillage," a term used in winemaking to describe the air pocket between wine and the top of a storage container, such as a barrel or bottle. In reference to the Ares I, ullage refers to the space inside the top of the upper stage fuel tank and the need to settle the fuel to the bottom of the tank.

The ullage settling motor is a small, solid rocket motor that serves a key role during the launch of the Ares I rocket. During first stage separation, which occurs 125.8 seconds into flight, the motor will fire for four seconds, producing the forward thrust needed to ensure the rocket's liquid fuel is properly pushed to the bottom of the upper stage fuel tank prior to ignition of the J-2X engine that powers the upper stage.

The ullage motor is similar in design to the booster separation motor used on the space shuttle's reusable solid rocket motor. Four ullage motors will be arranged in equally spaced locations (every 90 degrees) around the Ares I upper-stage aft skirt. This marked the final development ullage workhorse motor test, which uses a heavy steel motor case designed for multiple tests. Engineers used data collected from the first ullage motor test in September 2008 to modify the motor for this test. Refinements include increased motor burn time, the addition of a new flight igniter to start the motor, a newly designed nozzle throat insert, and bonding of the motor insulation material to aluminum instead of steel.

Instrumentation also was added to track motor performance by measuring acoustics and combustion stability. Several upper-stage witness panels were placed in the plume flow to determine the potential erosion effect of the burning propellant on the exterior of the Ares I vehicle.

"Thanks to our great team, we have been able to take this motor from the drawing board to the test stand and implement the changes necessary for a successful test series," said Steve Harvison, ullage settling motor design lead at Marshall.

The ullage motor is the first small motor in decades to be designed, developed and tested at the Marshall Center. The ullage team included Marshall engineers; ATK Space Systems; and the U. S. Army’s Aviation and Missile Research, Development, and Engineering Center (AMRDEC) at Redstone Arsenal in Huntsville.

The Boeing Company's Space Exploration division team in Huntsville, as upper stage prime contractor, and ATK Space Systems, Magna, Utah, as the subcontractor, have been awarded NASA contracts to manufacture the remaining development & qualification test motors for the next series of tests scheduled to begin in Spring 2010.

NASA's Johnson Space Center in Houston manages the Constellation Program, which includes the Ares I rocket, the Ares V heavy-lift launch vehicle, the Orion crew capsule and the Altair lunar lander. The Marshall Center manages the Ares Projects for the agency.

Video of the ullage motor test will be available the afternoon of Oct. 8 on NASA Television's Video File. For NASA TV downlink, schedule and streaming video information, visit:


For a photo of the test and more information about Ares, visit: