Thinking Big About Space Telescopes
NASA's next moon rocket is still on the drawing board, but already scientists are dreaming up big new things to do with it.

"The Ares V rocket will be able to launch missions whose volume or mass or both can be handled no other way," says Philip Stahl, an internationally respected optical engineer now at NASA's Marshall Space Flight Center. Maybe, he says, we should use it "to launch big space telescopes."

Image at right: A 6- to 8-meter space telescope would dwarf the Hubble Space Telescope. Key missions would include searching for and exploring earthlike planets in deep space. (NASA)

How big? Consider the following: Ares V will be able to place almost 130,000 kg (284,000 lbs; 8% more than the Saturn V rocket of the 1960s) into low Earth orbit. Designed to deliver cargo to the Moon, the rocket would be large enough to carry primary mirrors 8+ meters wide. For comparison, Hubble's mirror measures 2.4 m.

"How does a typical astrophysicist work?" Stahl asks. "He builds a giant telescope on top of a mountain and uses it for decades, and every few months or years he swaps out instruments or does other upgrades to keep it going." The Hubble Space Telescope operates in this fashion, with the space shuttle doing the servicing and Earth-orbit playing the role of mountain peak.

But Stahl wants to go beyond Earth orbit, far beyond, to the L2 Sun-Earth Lagrange point.

A Lagrange point is, basically, a parking spot in space. If you put a spacecraft at a Sun-Earth Lagrange point, it remains in a fixed position relative to the Sun and Earth. 18th-century mathematician Josef Lagrange showed that there are five such points, illustrated in the diagram below. 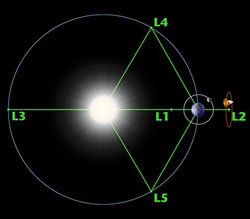 L1, located 1.5 million km sunward of Earth, is a good place for solar observatories. The Solar and Heliospheric Observatory (SOHO), for example, is there now and enjoys a 24/7 view of the sun.

L2 lies in the opposite direction, 1.5 million km above the nightside of Earth. A key advantage of L2 is that the Sun, Earth and Moon are concentrated in one small part of the sky, giving any telescope located there a wide and unobstructed view of deep space. The Wilkinson Microwave Anisotropy Probe (WMAP) is stationed at L2 and others will eventually join it.

"L2 is a place in space where we want to place a lot of telescopes," Stahl continues. So "why don't we treat it as a mountaintop?" with the telescope's satellite bus providing all the services of a real mountaintop facility.

Thus, Stahl, Marc Postman of the Space Telescope Science Institute, and others within the space science community are thinking big.

Wish-list missions for the Ares V range from a 150-meter-wide (492 ft) radio telescope dish to detect whispers from deep space to a 5-meter cube of super-pure water encased in light detectors to assay cosmic rays by their light flashes as they crash through the water. An optical telescope with a primary mirror up to 8 m (26 ft.) in diameter could search star populations in the Milky Way and nearby galaxies for the "fossil record" of their evolution. It could also hunt for "Earthshine spectra," faint signs of life in the light reflected by exoplanets. 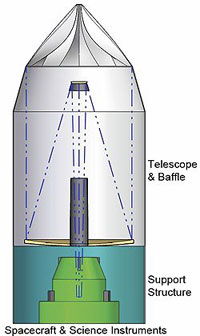 The resolution of the telescope's images would be more than three times sharper than those of Hubble. More important, the mirror would see about 11 times fainter than Hubble because the area of the mirror would be 11 times greater.

Image at right: A cutaway diagram of the large monolithic space telescope shows that most of it is empty space, leaving designers plenty of margin in equipping the systems and instrument modules. (NASA)

Until now, such a mirror was too big to consider. The next-generation James Webb Space Telescope -- also headed for L2 -- was regarded as the path for future large space telescopes. Its 6.5-m primary mirror will consist of carefully folded segments that precisely align once on station. But future Ares V payload shrouds up to 12 m (39.4 ft) have been envisioned by NASA planners. That allows Stahl to consider an off-the-shelf mirror, like the single-piece, 8-m (26.2 ft) primaries in the ground-based Gemini telescopes.

While increasing size, the Ares V would decrease risk. "The constraints of current launch vehicles place risks on technical performance, cost, and schedule to get a lot out of a small package," Stahl explains. The generous size and mass afforded by the Ares V all but eliminates those constraints for most payloads.

He also sees servicing as a key element.

"Why design for 10 to 15 years?" Stahl asks. "Let's design so you can swap the instruments periodically and go for 50 years." The bus section -- controls and instruments -- will be small enough that replacements could be sent by smaller launch vehicles and equipped to replace all the serviceable components and start a new scientific observing campaign.

In Postman's words, that would "make L2 the ultimate astronomical summit."
› Back To Top