Building a New Rocket: It IS Rocket Science
Go to any hobby shop, and model rocket kits line the shelves. Complete with instructions, building materials, even paint, these one-stop-shopping kits are a young rocket enthusiast's dream. After a few hours of concentration and lots of glue, what was once a heap of tubes, plastic parts and miniature motors is now a rocket ready for launch. 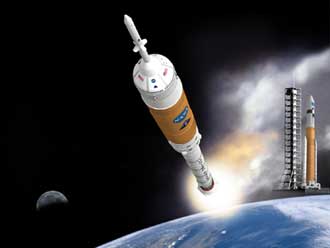 Image at right: Concept image of the Ares I crew launch vehicle, left, during launch and the Ares V cargo launch vehicle on the launch pad. Credit: NASA/MSFC

Building a rocket that can send humans and tens of thousands of pounds of cargo to space is no easy task. But it's exactly what engineers are doing today in support of NASA's exploration goals to send humans back to the moon and travel to Mars and destinations beyond.

The hard work begins at the design level, where decisions about the shape and size of a vehicle and its subsystems are made and modified several times before a final design is set. In fact, the Saturn V rocket that launched the Apollo astronauts to the moon in the late 1960s went through at least eight design changes, and the Apollo crew module went through numerous designs, as well, before NASA chose the capsule shape. Likewise, the space shuttle went through several design options before the final flight vehicle you see today was chosen and approved in 1972.

Design work is already under way for Ares I. NASA engineers are conducting a series of wind tunnel tests on scale models of this crew launch vehicle. The tests are being performed in wind tunnel facilities at NASA's Marshall Space Flight Center in Huntsville, Ala.; Langley Research Center in Hampton, Va.; Ames Research Center in Moffett Field, Calif.; and at the Boeing Company, in St. Louis, Mo.

In the test tunnels, giant fans or high-pressure air sources generate artificial wind that flows over scale-model hardware. The resulting aerodynamic data help rocket engineers determine how a new concept vehicle will perform and maneuver during flight, and how much cargo a new launch system can carry to space. The information gathered allows scientists and engineers to analyze designs before building full-size space hardware, saving time and money.

The wind tunnel test series is a complex process that takes a building block approach. A scale model is built to reflect the current configuration, or design, of a vehicle and tests are conducted as part of a "design analysis cycle." Data gathered from the tests are analyzed and any necessary changes are made to the configuration to optimize performance and reliability of the design. Then, a new model is built and testing begins again. Thus, inputs from each test series build on the previous one, often meaning what you start with is not necessarily what you end up with as a final design. 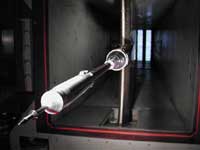 Image at right: A model of the integrated crew module and launch vehicle sits in one of four wind tunnel facilities used by NASA for a series of tests. Credit: NASA/Boeing

"The process of taking a launch vehicle concept from paper to flight is like a puzzle," said Larry Huebner, former Ares aerodynamics panel chairman in the Exploration Launch Projects Office at Marshall. "You get smarter as you go, as you add more pieces to the picture. Each discipline -- from aerodynamics to thermal environments to structures to the launch abort system -- works together to ensure each piece of that puzzle fits their individual needs and requirements, as well as those of the vehicle as a whole.

"What is good for aerodynamics may not be an advantage to the structures group," Huebner added. "So the team has to make sure a solution to an aerodynamic problem doesn't then create trouble for another discipline. The process is all about analyzing the data received and working as an integrated team to find solutions that ensure sound decisions are made -- not only about the individual vehicle elements, but also the launch vehicle as an integrated system."

Since December 2005, when the wind tunnel tests series for the Ares I design began, more than 1,500 test runs have been conducted on seven different scale models of the crew launch vehicle. These models, depending on test objectives, have ranged from a full-configuration, including the entire crew and launch vehicle assembly, to partial models, representing only certain elements of the assembly.

The first, a 16.5-inch (0.5-percent) scale model, was based on the original design outlined in NASA's Exploration Systems Architecture Study, which baselined how NASA would develop the Ares launch vehicles, the Orion crew exploration vehicle and the other spacecraft needed to return to the moon and travel beyond. The model was built at the Marshall center and tested last December at Marshall's Aerodynamic Research Facility. It included the launch vehicle, Orion vehicle, service module and launch abort tower, to simulate the full shape to be launched by the rocket.

Image at right: Test engineer Alonzo Frost checks the level on a model of the crew module and launch vehicle stack during testing at Marshall’s Aerodynamics Research Facility. Credit: NASA/MSFC

These initial tests provided the first set of data on the Ares I configuration, giving engineers basic information about the design's potential flight performance -- its balance and how it flies. The tests measured aerodynamic forces by adjusting airflow in the tunnel to simulate flight speeds similar to those Ares I will encounter during liftoff and flight to space. The engineers also performed flow visualization tests, imaging used to identify shock and expansion waves over vehicle components similar to that experienced during supersonic flight.

Data collected from these three initial test series at Marshall, Ames and Langley led to changes in the design.

With this information, a new 38-inch model (1-percent) scale model was built and tested in May at Langley's Unitary Plan Wind Tunnel and at Boeing's Polysonic Wind Tunnel.

The fidelity of the model also changed at Langley, as engineers enhanced the former smooth surface with geometric details representing components -- the booster separation motors, reaction control system, propellant feed lines and vehicle system tunnels -- that could affect the rocket's flight. Tests were conducted with and without these "protuberances" to see how they affected flight. Boeing also performed oil flow tests, in which colored oils were put on the model to show air flow surface patterns.

In June, the test series returned to Marshall. This time the model was 13 inches long -- a 1.5-percent partial model of Ares I. These tests became more precise, as engineers concentrated on the upper portion of the launch vehicle on several key components that could affect airflow during flight, including the launch abort system, crew module, service module and spacecraft adapter, as well as a portion of the Ares I upper stage element. 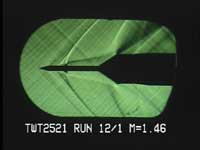 Image at right: Engineers conduct wind tunnel testing in June on a partial model of the Ares I launch vehicle that includes a portion of the upper stage, the spacecraft adapter, the Orion crew module and launch abort system. Credit: NASA/MSFC

All these tests serve a vital role in developing NASA's Ares I launch vehicle. Each sets the foundation for more detailed testing on the design. And each time, as the model’s configuration changes and more details are added, the model becomes larger and more complex, moving NASA one step closer to more accurate data and to a size more representative of a true launch vehicle -- and one step closer to the final Ares I design.

This hard work and invested time pays off when rocket scientists bring their designs from the virtual drawing table to actual hardware and testing. The first test flight of the Ares I-1 is scheduled for the spring of 2009 and will use a combination of actual and simulated hardware to give engineers even more data on which to base design decisions.

Testing of the Ares models is managed by NASA's Exploration Launch Projects Office at the Marshall center, which reports directly to NASA’s Constellation Program Office at NASA's Johnson Space Center in Houston. The program is an element of the Exploration Systems Mission Directorate at NASA Headquarters in Washington.


For information about NASA and agency programs, visit: