Grow Text SizeShrink Text Size
The Root of the Problem: What Caused the Ares I-X Parachute to Fail? 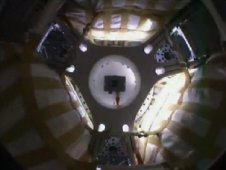 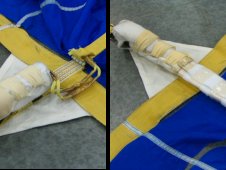 Comparison of before and after design of the Ares I-X parachute. Credit: NASA
View larger images/captions 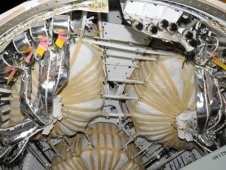 For the Ares I-X team the trick was in that "pull cord" step. After a thorough root cause analysis, NASA has pinpointed the likely culprit behind the Ares I-X parachute system anomaly -- an errant cord yank that caused one reefing line pyro charge to fire prematurely while still in the parachute pack.

During the Ares I-X suborbital flight, the packed parachutes shook and shimmied inside the vehicle. Engineers believe the pack dynamics resulted in the snagging of a reefing line cutter lanyard, pulling the pin and activating the blade that cuts the line before the parachutes were deployed.

To understand what caused the early cut, it's important to understand how the parachutes are installed in the vehicle. The interior of the Ares I-X Forward Skirt Extension differs from the Shuttle frustum, an intentional design change. Ares designers shortened a Y-shaped interior support structure to reduce the risk of snagging and damaging the fabric canopy during deployment. This design change provided more room for the parachutes but introduced an opportunity for them to move more than anticipated during the flight.

Post-launch Ares I-X video analysis taken from an on-board camera shows the parachute packs swinging side-to-side inside the vehicle. This movement, which was greater than expected, is the likely cause of the premature tug of the lanyard linked to the reefing line cutter.

Because the reefing line for the first reefing stage was cut prior to parachute deployment, the impacted canopy opened, or "dis-reefed," immediately to its second stage. This created an overload condition on the parachute and a subsequent failure in its suspension system. The deflation of the first parachute created an additional overload condition on the remaining two parachutes prompting the partial failure of the second parachute. Even overloaded, the damaged parachutes guided the hefty stage to splashdown only slightly tilted from vertical at water impact. The stage sustained some damage from the harder-than-nominal water impact but was still recovered yielding valuable onboard test data.

The engineering team redesigned the existing reefing line cutter pocket by lengthening the felt enclosure to encase the lanyard along with the reefing line cutter. This design change will protect the lanyard from being snagged while inside the pack before the parachutes are deployed. NASA and partners will test this design, April 14, during the next scheduled parachute drop test at Yuma Proving Grounds, near Yuma, Ariz.

NASA's Marshall Space Flight Center, Huntsville, Ala., is responsible for project management of the Ares I first stage. ATK Launch Systems, Brigham City, Utah, is the prime contractor for the first stage booster. ATK's subcontractor, United Space Alliance, Houston, is responsible for the design, development and test of the parachutes at their facilities at the Kennedy Space Center, Fla. The U.S. Army's Yuma Proving Ground provides the test range, support facilities and equipment to NASA for parachute testing.