Lightning Protection for the Next Generation Spacecraft 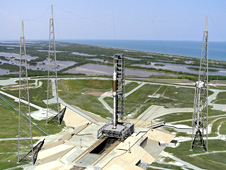 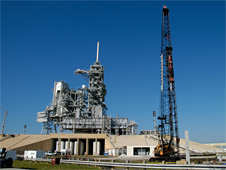 At Launch Pad 39B, pilings are being pounded into the ground to help construct lightning towers for the Constellation Program and Ares/Orion launches. Pad B will be the site of the first Ares vehicle launch, including Ares I-X which is scheduled for April 2009. Credit: NASA/George Shelton


Thunder rumbles in the distance as darkening clouds gather above NASA Kennedy Space Center's Launch Pad 39B, where a sleek Ares I launch vehicle stands awaiting an upcoming flight. A blinding lightning flash suddenly streaks down from the sky, striking one of the pad's tall steel masts. The surge of electrical current quickly is diverted away from the rocket and carried safely into the ground.

This scenario hasn't happened yet; the Ares I rocket is still in development, and NASA is just beginning to transition Launch Pad 39B from a space shuttle facility into the launch site for the Constellation Program's Ares I crew launcher. But lightning is a well-known danger in central Florida, and a team of NASA and contractor personnel already is working to design and build a new lightning protection system that's larger than any the spaceport has ever seen. The new system features large cables strung between three 594-foot-tall steel and fiberglass towers. Called a catenary wire system, it will dominate the launch area's skyline.

The new system will provide better protection from lightning strikes and help avoid delays to the launch schedule by collecting more information on the strike for analysis by launch managers.

Launch Pads 40 and 41, located south of Launch Complex 39, each have lightning protection systems similar to the new version. Each tower is topped with a fiberglass mast and a series of catenary wires and down conductors designed to divert lightning away from the rocket and service structure. This configuration helps keep the vehicle isolated from dangerous currents.

Lightning protection systems have steadily evolved as the space program has progressed. The Apollo system, for example, was a bonded system. "A bonded structure is part of the launch structure," says Constellation Senior Pad Project Manager Jose Perez Morales. "Obviously, if you get a lightning strike, it doesn't matter how well you place your wires -- you're going to get current going through the structure."

For the space shuttle, the lightning protection system consists of a lightning mast on the top of each pad's service structure and two catenary wires. This system provides shielding to the space shuttle and diverts strike currents down to the ground, making it an isolated system and an improvement over the Apollo arrangement. The system under development for the Constellation Program’s next-generation vehicles would significantly increase the shielding level and further separate the electrical current from vital launch hardware.

Additionally, technology has advanced considerably since the early days of space exploration. Lightning detection has become simpler and faster as computer modeling has become more sophisticated.

"In the years of Apollo, most of these things were done by hand," Perez notes. "Because of the new computers and the ability to do a lot of probability models, the whole thing has evolved. That's how they can now design more effective lightning protection systems."

Now there are decades' worth of local lightning data recorded, so computer models are not only faster, but more accurate than ever.

There's another benefit to the new system: An array of sensors, both on the ground and the mobile launcher, will help determine the vehicle's condition after a nearby lightning strike. This can prevent days of delays. Currently, "If there's been a strike and you're not sure whether the vehicle was hit, then at the very least you could have an impact on your schedule because you'll have to stop and test," says NASA Project Manager Lori Jones.

Ivey's Construction Inc., the contractor in charge of building the lightning protection system, received NASA's go-ahead to proceed in September. Construction began in November with the arrival of large cranes and concrete pilings. The system's foundation will include 216 of these pilings extending up to 55 feet below ground. The massive steel towers will be partially assembled horizontally on the ground, then lifted into the vertical position by a 60-story-tall crane. Construction is expected to be complete in 2010.

According to NASA Construction Manager Jason Ritter, along with the standard challenges associated with this construction effort, nature will provide a few of its own.

"Most of the work isn't technically difficult, but it's big and time-consuming," Ritter says. "When you're working on a launch pad that has lightning and high winds and sea breezes, and it's an operational pad, those are the things we consider difficult to work through."
Anna Heiney
NASA's John F. Kennedy Space Center
› Back To Top