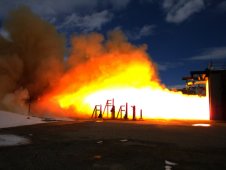 NASA has completed a successful test firing of the igniter that will be used to start the Ares I rocket first stage motor.

The March 10 test paves the way for the initial ground test of the Ares I first stage later this year. Ares I is the first launch vehicle in NASA's Constellation Program family of space vehicles that will transport astronauts and cargo to the International Space Station, the moon and beyond in coming decades.

"This successful test represents a milestone in our continuing development of the Ares I first stage," said Alex Priskos, first stage manager for the Ares Projects at NASA's Marshall Space Flight Center in Huntsville, Ala. "We continue to design a robust propulsion system that will provide a safe and reliable means of transportation for NASA's future missions of exploration."

The test, conducted at ATK Launch Systems test facilities near Promontory, Utah, generated a flame almost 200 feet in length. Initial data showed the igniter performed as expected. ATK Launch Systems, a division of Alliant Techsystems of Brigham City, Utah, is the prime contractor for the Ares I first stage.

The Ares I igniter is an enhanced version of the flight-proven igniter used in the space shuttle's solid rocket boosters. The igniter takes advantage of upgraded liner and insulation materials that have improved thermal properties which protect the igniter's case from the burning solid propellant.

The new igniter is approximately 18 inches in diameter and 36 inches long. It is a small, high-burn-rate solid rocket motor that is secured in the forward segment of a five-segment booster. Once the command is sent to the igniter, a sequence begins that sends a flame down the core of the 142-foot solid rocket motor. In less than a second, the booster generates more than 3.5 million pounds of thrust, triggering liftoff of the rocket.

The Ares I rocket is an in-line, two-stage rocket topped by the Orion crew capsule; its service module and a launch abort system. The first Ares I test flight, called Ares I-X, is scheduled for later this year. The first crewed flight of Orion is planned for 2015, with the first lunar excursion scheduled for 2020.

NASA's Constellation Program, which is building the spacecraft that will return us to the moon, includes the Ares I rocket, the Ares V heavy cargo launch vehicle, the Orion crew capsule and the Altair lunar lander. Marshall manages the Ares Projects.

For more information about Ares, visit: