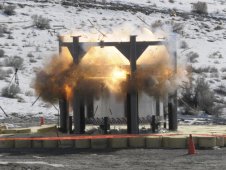 The development of NASA's next-generation crew launch vehicle, the Ares I rocket, took another step forward Thursday as Alliant Techsystems, or ATK, successfully tested a critical piece. ATK conducted a full-scale separation test of the forward skirt extension for the Ares I-X flight test at its facility in Promontory, Utah.

The Ares I-X test launch is scheduled to lift off from NASA's Kennedy Space Center in Florida during 2009. The rocket will climb about 25 miles in altitude during a two-minute powered flight. The launch will culminate with a test of the separation of the first stage from the rocket and deployment of the accompanying parachute system that will return the first stage to Earth for data and hardware recovery.

Yesterday's test simulated the separation event that will take place following the first stage flight of Ares I-X. During the Ares I-X flight, the booster will separate at the frustum, a cone-shaped piece that attaches the first stage to the larger diameter upper stage.

"The Ares I-X team is pleased with the completion of this key test that will provide important data leading up to the launch of the Ares I-X flight," said Steve Davis, deputy mission manager for the Ares I-X test flight at NASA's Marshall Space Flight Center in Huntsville, Ala.

At an altitude of about 15,000 feet, the nose cone will be jettisoned, deploying the pilot parachute. The pilot chute will, in turn, deploy the drogue parachute, which will re-orient the booster vertically and slow it to acceptable conditions for main parachute deployment. At about 4,000 feet, the separation at the base of the forward skirt extension occurs, pulling out the three main chutes packed inside.

Test objectives included demonstrating that the linear shaped charge used to separate the forward skirt extension severed cleanly and measuring the shock created by that charge. The data will be used to analyze the system and prepare for the Ares I-X flight test and the development of the Ares I crew launch vehicle.

The forward skirt extension is built to withstand the loads of the first stage and support the weight of the upper stage. The component is built as one solid piece of aluminum forged into a 6-foot-long by 12-foot-diameter cylinder with a unique internal support structure that houses three newly-designed main parachutes. Its state-of-the-art design will withstand the force imparted at main chute deployment.

"This was an important milestone for the program, as it validates key parameters to support the upcoming Ares I-X flight test," said Mike Kahn, executive vice president of ATK Space Systems. "The program is one step closer to the flight test of Ares I-X."

To view pictures of the separation test, visit: