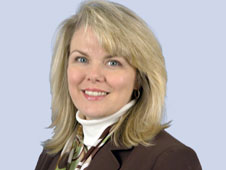 Kimberly Robinson was named the Project Integration Manager for the Ares I-X test flight project in 2005. With this assignment, Ms. Robinson assists in the overall management and development of the Ares I-X mission. Her work includes technical leadership of the multi-disciplinary team performing project integration and responsibility for the integrated mission products. Some of these functions include developing and maintaining the integrated master mission schedule, managing risk -- including risk assessment and mitigation planning, and configuration and data management for system level documentation, data, hardware, and software.

Prior to her work with the Space Transportation Programs/Projects Office, Ms. Robinson served as Special Assistant to the Marshall Space Flight Center Director from 2004 to 2005. In this position, she was responsible for reviewing, evaluating and making recommendations concerning matters dealing with a wide range of Center management functions.

From 1998 to 2004 Ms. Robinson worked as a Project Manager in the Microgravity Program Office of the Science Directorate at NASA Marshall. She was responsible for the leadership of project teams which developed flight investigations from initial formulation to flight hardware verification. In this role, Ms. Robinson provided technical leadership in such areas as detailed design drawings development, flight hardware fabrication, risk management and mitigation, testing and evaluation, certification, budget allocation and control, and contract management.

Ms. Robinson began her career at NASA in 1989 as a Project Engineer in the Propulsion Laboratory at Marshall where she performed system-level design and evaluation of glove box, workbench and laboratory support equipment concepts and trade studies for the International Space Station. In addition, Ms. Robinson designed, developed, integrated, and tested a Cryogenic Bearing Wear Particles Filtration System to determine contributing causes to bearing life degradation within Space Shuttle turbo pumps.

Ms. Robinson's work has earned her numerous commendations for outstanding performance and various achievement recognition awards from NASA, including a Silver Snoopy Award and the Special Service award for excellent leadership in developing and implementing a plan for an Ascent Development Test Flight.

Ms. Robinson, a native of Birmingham, Ala., is married to Keith Robinson, formerly of Gadsden, Ala. They live in Huntsville, Ala. with their 3 sons.
› Back To Top