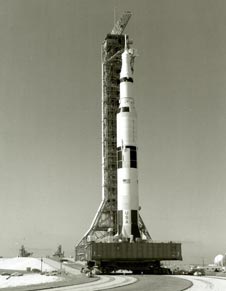 May 20, 1969: The Apollo 11 Saturn V rolls from the Vehicle Assembly Building to Launch Complex 39A in preparation for the first moon landing during the mission. Image credit: NASA
› View larger image 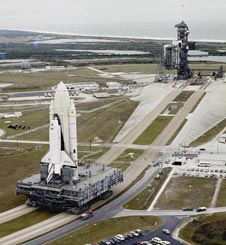 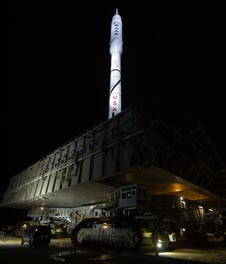 For more than 40 years, the twin crawler-transporters at NASA's Kennedy Space Center have traveled the gravel track between the massive Vehicle Assembly Building and the two launch pads at Launch Complex 39. These mammoth beasts carried all the Apollo Saturn V rockets, and later each space shuttle, on the last Earth-bound leg of their journeys to space.

On Oct. 19, 2009, a new chapter in the crawler history was written as the first test rocket of the Constellation Program -- the Ares I-X -- was transported slowly along that same gravel track.

The towering 327-foot-tall launch vehicle, bolted to its mobile launcher platform, road majestically into the spotlight atop one of the crawlers as it exited the huge building where the rocket was assembled. The combined weight of the Ares I-X, mobile launcher platform and the crawler itself was a whopping 16 million pounds. Moving at less than 1 mph, the crawler safely delivered its precious cargo to the launch pad, just as it had so many times throughout the years.


The technology used to build the huge, reliable crawlers capable of such Herculean tasks was deeply rooted in the coal fields of Ohio. There, mammoth machines were used to excavate and extract the precious coal veins running through that part of the country.

But it's doubtful that the crawlers' designers from the Marion Power Shovel Company could have ever imagined their creation would still be moving launch vehicles in the 21st century as yet another generation of rockets prepare to take flight.

Phil Koehring, son of the crawlers' engineering designer, said upon the vehicle's 40th anniversary, "This was a machine that was built to last. There were a lot of naysayers about this program in the early days, and all I can say is, 'We've shown them!'"

You can learn more about the history of the crawler, what it takes to drive the mammoth vehicle, and follow the Ares I-X flight test.