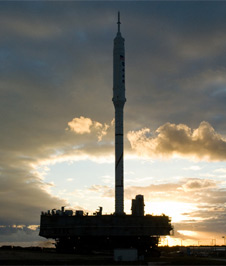 The 327-foot-tall Ares I-X rocket is silhouetted against the early morning sky as it lumbers along the 4.2-mile route to Launch Pad 39B. Image credit: NASA/Kim Shiflett
› View larger image 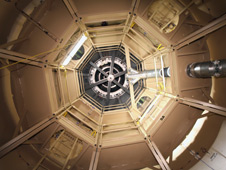 Steep ladders mounted inside the upper stage simulator provide the only access inside the vehicle for the installation of instruments and equipment. Image credit: NASA/Glenn Benson
› View larger image 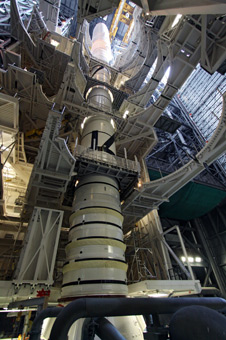 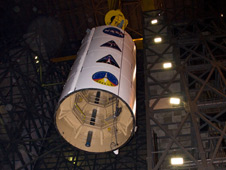 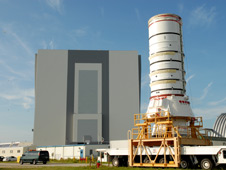 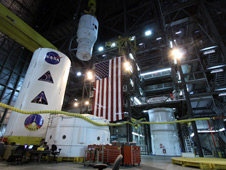 Ares I-X has completed the first leg of its upcoming mission.

NASA's newest rocket -- currently the largest in the world -- emerged from the Vehicle Assembly Building at 1:39 a.m. EDT Oct. 20, 2009, beginning a 7.5-hour trek through the predawn darkness to Launch Pad 39B at Kennedy Space Center in Florida.

It's the first new vehicle to occupy Launch Pad 39B in more than 25 years.

The goal of the test is to give NASA the chance to see the Ares I flight hardware, facilities and launch procedures in action. With more than 700 sensors on board, Ares I-X is wired to relay ascent data that will be critical for future flights.

The 1.8-million-pound rocket stayed "steady as a rock" throughout the 4.2-mile journey, according to NASA's Jon Cowart, one of two Ares I-X deputy mission managers overseeing the assembly and launch.

"For those of us who've lived with the shuttle and grew up looking at the Saturn Vs, it's obviously a little different than what we're used to seeing," Cowart said as the tracked crawler-transporter carried the 327-foot-tall rocket and its mobile launcher platform to the top of the pad. The rocket's upper stage loomed high above the top of the pad's fixed service structure, surpassed only by the pad's three lightning masts.

Closer in height to the hulking Saturn V moon rockets than the space shuttle, Ares I-X looks unlike any rocket that's ever stood at Launch Complex 39. But it blends familiar hardware from existing programs with newly developed components.

'We've Got a Rocket'

The fast-paced assembly sequence kicked off in late 2008, when flight hardware began arriving at the Florida spaceport from NASA field centers and contractors across the country.

In order to handle the influx of Ares I-X components, the processing team needed more room than the Vehicle Assembly Building's High Bay 3 and booster facilities could provide. So elements were stored, inspected, fitted or joined together in additional facilities across the space center, and even at the Astrotech Space Operations facility in nearby Titusville, Fla.

The simulated upper stage arrived in November 2008 aboard the Delta Mariner barge after a journey from NASA's Glenn Research Center in Ohio. In January 2009, a C5 cargo plane carried the full-scale crew module simulator and launch abort system from the agency's Langley Research Center in Virginia to Kennedy's Shuttle Landing Facility.

As assembly began, NASA Vehicle Processing Engineer Trent Smith was tasked with ensuring the work was done in the right order and that all necessary parts and personnel were available.

Along with the crew module and abort tower, the upper stage's seven tuna can-shaped pieces, service module, spacecraft adapter and two interstage connectors were staged in the Vehicle Assembly Building's High Bay 4 prior to stacking.

The funnel-like frustum, forward skirt with its extension, and simulated fifth booster segment arrived from Indiana, where they were manufactured by Major Tool and Machine. First-stage prime contractor ATK Space Systems built the four solid-fueled booster segments, which reached Kennedy in March 2009 after a seven-day, cross-country train ride from Utah.

A day later, the aft, or bottom, segment of the first-stage solid booster rolled into the Vehicle Assemble Building and was secured to the mobile launcher platform in High Bay 3, marking the official start of final assembly.

"When we started stacking, it was a very big deal for us," Cowart said of the Ares I-X team. "We stacked all four of the boosters, then we were ready to bring over Super Stack 1."

"I remember going up to Level 34 and looking down, and going on the E roof -- which is right about where the fifth segment simulator is -- and looking up, then down," Smith said. "That's when it really dawned on us that this is a tremendously tall rocket."

Barely five weeks after stacking began, Ares I-X was crowned with Super Stack 5, consisting of the launch abort system, crew module, service module and spacecraft adapter. The completed rocket towered above the surface of the mobile launcher platform, leaving only 10 feet of clearance for the heavy-lift crane to remove the birdcage-shaped framework that lowered the final pieces into place.

Assembly of the one-of-a-kind launch vehicle finally was complete. But plenty of work remained. The rocket was put through its paces: a power-up test, or "smoke test," to validate the electronics boxes and wiring; a "sway test" to check the vehicle's response to vibrations it could face during rollout; instrumentation tests; and a simulated countdown and liftoff.

Once Ares I-X arrived at Launch Pad 39B, remaining milestones included a hot-fire of the rocket's auxiliary power units and checkout of the communications, instrumentation and telemetry. On launch day, most team members will be at their consoles seven hours before the opening of a four-hour launch window; Smith will ensure things are going well at the launch pad before retreating to a facility a safe distance away.

A successful liftoff will cap a demanding development and assembly process that Cowart believes illustrated NASA's entrepreneurial capability, as well as the dedication of the relatively small team that brought this flight from paper to reality.

Smith emphasized that the Ares I-X effort involved design centers, research centers, and multiple contractors -- all of which intersected at Kennedy.

"There was some education on all sides. Integrating and communicating were key to our success," he said. "What made it so rewarding was working through all the challenges and frustrations."

The Ares I-X flight test vehicle was still a concept about four years ago, Cowart pointed out.

"This is unprecedented in NASA history, for a rocket of this size," he said. "It's incredible."