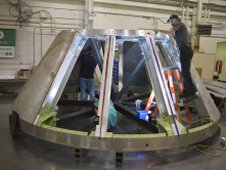 NASA is using powerful computers and software programs to design the rocket that will carry crew and cargo to space after the space shuttle retires. But those computers will have their work checked the old-fashioned way with the first of several uncrewed demonstration launches beginning in 2009.

Ares I-X, the first Ares I test rocket, will lift off from Kennedy Space Center, Fla. in the summer of 2009. It will climb about 25 miles (40.2 km) in a two-minute powered test of Ares I first stage performance and its first stage separation and parachute recovery system.

A less obvious -- but no less critical -- test will be of overall vehicle aerodynamics. Is the design safe and stable in flight? This is a question that must be answered before astronauts begin traveling into orbit and beyond.

With that question answered, the flight of Ares I-X will be an important step toward verifying analysis tools and techniques needed to further develop Ares I, NASA's next launch vehicle.

In order to ensure that the rocket's flight characteristics are fully understood, extreme care is being taken to precisely fabricate the rocket's simulated upper stage and the simulated Orion crew module and associated launch abort tower. These full-scale hardware components must accurately reflect the shape and physical properties of the models used in computer analyses and wind tunnel tests in order to confidently compare flight results with preflight predictions.

"We are a highly matrixed team -- a lot of people from various organizations -- that must work together successfully on a tight schedule," explained Kevin Brown, project manager for the Ares I-X Crew Module/Launch Abort System (CM/LAS) project.

"We have a team doing fabrication and assembly work in conjunction with an off-site contractor, and we have another team readying to install about 150 sensors once the crew module and launch abort tower are completed," he added. 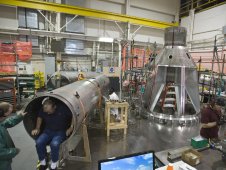 A fabrication engineering technician exits the Ares I-X launch abort tube, at left, while the "party hat," or launch abort system base, takes shape, at right. The completed components will be airlifted to NASA Kennedy Space Center, where they will be assembled prior to launch. The tube sections, representing the launch abort system tower, will be joined and mounted vertically on top of the party hat. Image Credit: NASA/Sean Smith

The simulated crew module, faithful to the vehicle that will ferry astronauts to the International Space Station by 2015, to the moon in the 2020 timeframe and ultimately to points beyond, will measure approximately five meters (16.4 ft) in diameter. While the conical module will have the same basic shape as the Apollo Command Module, it will be significantly larger. The simulated launch abort system, positioned above the crew module at launch, will add another 46 feet (14 m) in length to the combined simulator.

The sensors will measure aerodynamic pressure and temperature at the nose of the rocket, and contribute to measurements of vehicle acceleration and angle of attack. How the tip of the rocket slices through the atmosphere is important because that determines the flow of air over the entire vehicle.

"This launch will tell us what we got right and what we got wrong in the design and analysis phase," said Jonathan Cruz, deputy project manager for Ares I-X CM/LAS. "We have a lot of confidence, but we need those two minutes of flight data before NASA can continue to the next phase of rocket development," he said.

The completed two-part flight test article is to be delivered to Kennedy in early 2009. Before launch, the combined crew module and launch abort system tower will be used to help demonstrate lifting, handling and stacking of Ares I-X flight test vehicle elements.

Ares I-X will provide important data for developing Ares I in time to support the vehicle's critical design review in 2010.