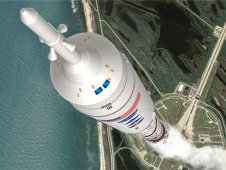 The first high-altitude test of the Ares I rocket that will launch astronauts on journeys to the International Space Station, the moon, and beyond is scheduled for later in 2009. The Ares I-X flight test vehicle will launch from NASA's Kennedy Space Center. Image Credit: NASA

The first flight test of NASA's new rocket configuration to carry astronauts into space will take place later this year. Ares I-X consists of a four-segment first stage solid rocket motor, and a simulated upper stage that represents the weight and shape of the Ares I rocket and Orion crew vehicle. It will be launched in a suborbital arc into the Atlantic to collect data on its flight dynamics and parachute recovery performance.

The flight of the unpiloted Ares I-X will be an important step in confirming that the rocket design is safe and stable in flight before piloted flights of Ares I begin in the middle of the next decade.

But -- even before the launch of Ares I-X -- a critical series of ground tests will take place to confirm that the vehicle's dynamic response will respond to launch loads and vibrations the way that computer analytical models have predicted it will respond.

"While we are confident in the predicted model results and simulations, these ground tests are critical because we have no experience launching rockets as long and slender as Ares I-X," according to Paul Bartolotta, Ares I-X Modal Test Lead who is responsible for leading a NASA-wide Modal Test Team from his office at NASA's Glenn Research Center, Cleveland, Ohio. 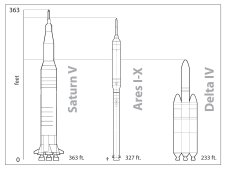 Due to its long slender shape, the Ares I-X is unique from a flight dynamics standpoint.

"We're going to be shaking the vehicle to make sure our structural models match the actual vehicle characteristics," said Kurt Detweiler, Ares I-X Lead Systems Engineer, based at NASA Langley. "This is important for determining how the vehicle will respond during flight. If the vehicle doesn’t match the analytical model, its guidance, navigation and control systems will be off," he added.

This "modal testing," which refers to measuring a target set of bending modes, will include two partial stack tests and a test of the full Ares I-X vehicle on the Mobile Launch Platform, all in the Vehicle Assembly Building at Kennedy. 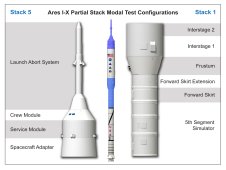 The first partial stack test, shown in the diagram on the left, involves only the top part of the vehicle. The second partial stack test is shown on the right. The center diagram illustrates the full vehicle, with the blue areas representing Stack 5, at top, and Stack 1, midway, on the vehicle. Image Credit: NASA

The modal tests are a planned part of the build-up and integration of the Ares I-X test vehicle. In the first partial test, the topmost segments of the Ares I-X rocket -- which will simulate the launch abort tower, crew module, service module and spacecraft adaptor -- will be stacked vertically on a heavyweight spacecraft transportation cart. Two electro- mechanical shakers will be attached at the joint between the service module (which will house the second stage motor in the fully functional rocket) and the spacecraft adaptor (which will connect the uppermost segments to the rest of the rocket). The second partial stack test consists of the interstage, frustum, and the simulated fifth segment of the first stage of the rocket.

After all rocket elements are stacked, but prior to roll out, the Ares I-X full stack test will be conducted to validate yet more bending modes and interactions between rocket elements.

A series of sensors strategically located throughout the stacks will measure the amount and direction of movement, as the shakers impose random loads to determine the rocket segment’s first several bending modes. A comparison will be made between predicted and measured mode shapes to verify the Ares I-X flight dynamics model. Keith Henry, NASA's Langley Research Center
Katherine Martin, NASA's Glenn Research Center
› Back To Top