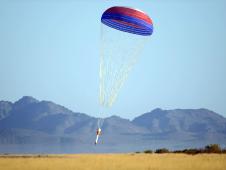 NASA and industry engineers conducted a design limit load test of the Ares I rocket's main parachute Oct. 8 at the U.S. Army's Yuma Proving Ground near Yuma, Ariz. The Ares I is the first rocket in NASA's Constellation Program which will launch explorers on journeys to the International Space Station, the moon and beyond.

Engineers from NASA's Marshall Space Flight Center in Huntsville, Ala., managed the team that conducted the test – the first in a series of three planned load limit tests – designed to place 100 percent of the flight dynamic pressures on the parachute canopy.

From the back of a U.S. Air Force C-17 aircraft, researchers dropped a 72,000-pound payload -- tying the record for the heaviest load ever extracted from the aircraft during flight -- from an altitude of 25,000 feet. The parachute and all test hardware functioned properly and landed safely.

"This was the ninth test for the Ares parachute recovery system, which is a tribute to the success of previous development testing," said James Burnum, first stage structural and mechanical team lead for the Ares Projects at the Marshall Center. “Thanks to the hard work of a dedicated team of professionals, we have taken the data collected from earlier tests, learned from it, and applied that knowledge to make sure our parachutes work right for the Ares I-X test flight and later the Ares I rocket." 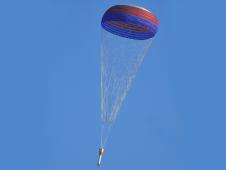 As the name implies, the test is designed to push the parachute’s canopy to its limit -- supporting a 250,000-pound dynamic load. Dynamic load weight is generated by the drag and pull of the payload. The primary test objective was to achieve a dynamic pressure of 110 pounds per square foot on the canopy, simulating the conditions the main parachute will experience when it is deployed to slow the rapid descent of the rocket's spent first-stage motor.

The main parachute – measuring 150 feet in diameter and weighing 2,000 pounds -- is the largest rocket parachute ever built and the primary element of the rocket's deceleration and recovery system, which also includes a pilot parachute and drogue parachute. The parachutes work in tandem providing the drag necessary to slow the descent of the huge solid rocket motor. The parachute system allows the first stage to achieve a soft landing in the ocean where it will be recovered, evaluated and prepared for reuse on future missions.

As the test series progresses, engineers perform three classifications of testing: development, design load and overload. Each level of testing is designed to fully test the performance of the new parachute design with different size payloads under varying conditions. The next load test, scheduled for spring 2010, will test the deployment of the drogue and pilot parachutes during a single drop. 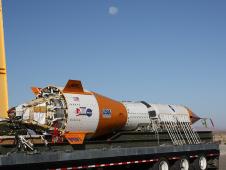 The Ares I recovery system uses parachutes similar to those used for the four-segment space shuttle boosters. The parachutes have been redesigned to accommodate the requirements of the Ares I first stage. The launch vehicle will have a five-segment solid rocket motor designed to fly faster and fall from a higher altitude than the shuttle boosters.

ATK Space Systems near Promontory, Utah, is the prime contractor for the first stage booster. ATK's subcontractor, United Space Alliance of Houston, is responsible for design, development and testing of the parachutes at its facilities at NASA's Kennedy Space Center, Fla.

For images of the main parachute test and more information about NASA's Ares Projects, visit:


When video from the test becomes available, it will air on NASA Television's Video File. For NASA TV downlink, schedule and streaming video information, visit: