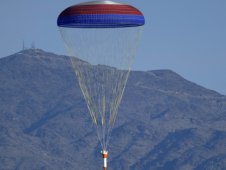 NASA and industry engineers successfully completed the second drop test of a drogue parachute for the Ares I rocket. The test took place Feb. 28 at the U.S. Army's Yuma Proving Ground near Yuma, Ariz.

The Ares I, the first launch vehicle in NASA's Constellation Program, will send explorers to the International Space Station, the moon and beyond in coming decades. The drogue parachute is a vital element of the rocket's deceleration system; it is designed to slow the rapid descent of the spent first-stage motor that will be jettisoned by the Ares I during its climb to space. The parachute will permit recovery of the reusable first-stage motor for use on future Ares I flights. The first-stage solid rocket motor will power the Ares I rocket for the first two minutes of launch.

This was the seventh in an ongoing series of flight tests supporting development of the Ares I parachute recovery system, which includes a pilot chute, drogue and three main parachutes. Researchers dropped the 68-foot-diameter drogue parachute and its 50,000-pound load, which simulates the rocket's spent first-stage motor, from a U.S. Air Force C-17 aircraft flying at an altitude of 25,000 feet. The parachute and all test hardware functioned properly and landed safely. 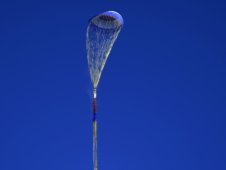 The drogue parachute will be used to pull out the main three parachutes for Ares I during the recovery sequence. Image Credit: ATK/NASA
View large image/caption

The parachutes being developed for the Ares I recovery system are similar to those used for the four-segment space shuttle boosters, but they have been redesigned to accommodate new requirements of the Ares I first stage. The Ares I will have a five-segment solid rocket booster that will move faster and fall from a higher altitude than the shuttle boosters.

Engineers from NASA's Marshall Space Flight Center in Huntsville, Ala., manage the team that conducted the test. ATK Launch Systems near Promontory, Utah, is the prime contractor for the first stage booster. ATK's subcontractor, United Space Alliance of Houston, is responsible for design, development and testing of the parachutes at its facilities at NASA's Kennedy Space Center in Florida. 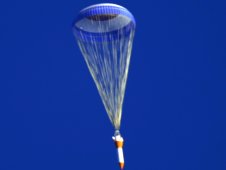 When video from the test becomes available, it will air on NASA Television's Video File. For NASA TV downlink, schedule and streaming video information, visit: