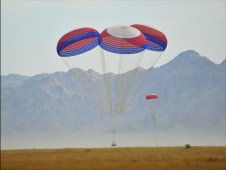 NASA and ATK successfully conducted an Ares I main cluster parachute test at the U.S. Army Proving Grounds in Yuma, Arizona on May 20, 2009. Image Credit: U.S. Army Yuma Proving Grounds
More images (Flickr slideshow)
View Video (Windows, streaming) Unfurling in majestic patriotic colors, a successful cluster test of the Ares I rocket's three, 1-ton main parachutes (Windows, streaming) was conducted May 20 by NASA and industry engineers at the U.S. Army Yuma Proving Ground located near Yuma, Ariz. The main parachute is designed to slow the rapid descent of the spent first-stage motor and permit its recovery for use on future flights.

The Ares I, the first launch vehicle being designed for NASA's Constellation Program, will launch explorers to the International Space Station, the moon and beyond in coming decades. The main parachutes -- the largest rocket parachute ever manufactured -- measure 150 feet in diameter and weigh 2,000 pounds each. They serve as the central element of the rocket's deceleration system, which includes a pilot parachute, a drogue parachute and the main parachutes. Deployed in a cluster, the main parachutes open at the same time, providing the drag necessary to slow the descent of the huge solid rocket motor for a soft landing in the ocean.

"The successful main chute cluster test today confirms the development and design changes we have implemented for the Ares I first stage recovery system," said Ron King, Ares I first stage deceleration subsystem manager for the Ares Projects at NASA's Marshall Space Flight Center in Huntsville, Ala. "Thanks to our great collaborative team the test went as anticipated and all of our design objectives were met."

Engineers from the Marshall Center managed the team that conducted this first cluster test with the newly designed parachutes. This was the eighth in an ongoing series of flight tests supporting development of the Ares I parachute recovery system. Researchers dropped the 41,500-pound load from a U.S. Air Force C-17 aircraft flying at an altitude of 10,000 feet. The parachutes and all test hardware functioned properly and landed safely.

As the test series progresses, engineers perform three classifications of testing: development, design load and overload. Each level of testing is designed to fully test the performance of the new parachute design with different size payloads and under varying conditions. The next test in the cycle -- scheduled for fall 2009 -- will involve the first design limit load test of a single main parachute. 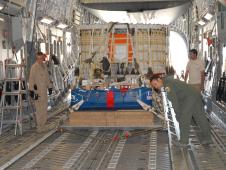 NASA and ATK test engineers at the US Army's Yuma Proving Ground prepare for the first test of all three Ares I main parachutes. Image Credit: U.S. Army Yuma Proving Grounds The recovery system currently under development uses parachutes similar to those used for the four-segment space shuttle boosters, but they have been redesigned to accommodate new requirements of the Ares I first stage. The Ares I will have a five-segment solid rocket booster that will fly faster and fall from a higher altitude than the shuttle boosters.

Situated in the southwestern Arizona, the Army proving ground -- the site of more than 36,000 annual parachute drops -- is in the heart of the great Sonoran Desert. Located near the Arizona-California state lines and adjacent to the Colorado River, it’s approximately 24 miles north of the city of Yuma.

ATK Space Systems near Promontory, Utah, is the prime contractor for the first stage booster. ATK's subcontractor, United Space Alliance of Houston, is responsible for design, development and testing of the parachutes at its facilities at NASA's Kennedy Space Center, Fla.

When video from the test becomes available, it will air on NASA Television's Video File. For NASA TV downlink, schedule and streaming video information, visit: