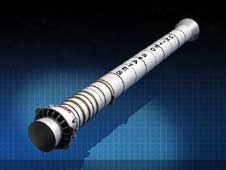 NASA has completed the preliminary design review for the first stage of the Ares I rocket -- giving overall approval for the agency's technical design approach. This review brings NASA one step closer to developing a new mode of space transportation for astronauts to explore the moon, Mars and beyond.

"We have been working a very aggressive plan for over two years and making great progress on detailed designs," said Steve Cook manager of Ares Projects at NASA's Marshall Space Flight Center in Huntsville, Ala. "Completing the preliminary design review of the first stage element is a critical step for development of the Ares I rocket."

Starting in 2015, the Ares I rocket will carry the Orion crew vehicle and its crew of four to six astronauts, and small cargo payloads, to the International Space Station. The first stage element will power the first two minutes of launch for the Ares I vehicle.

This just-completed preliminary design review, which was conducted at Marshall, looked at the current designs for the first stage to ensure that the planned technical approach will meet NASA's requirements for the vehicle.

This review was part of a series of milestones that will occur before the actual flight hardware is built. Each major review provides more detailed requirements for the vehicle design to ensure the overall system can meet all NASA requirements for safe and reliable flight. The review process also identifies technical and management challenges and addresses ways to reduce potential risks as the project goes forward.

"Our government and industry team is to be congratulated on meeting this important milestone for the integrated, five-segment first stage," said Alex Priskos, manager of the first stage. "We have tackled many challenges and look forward to our first development motor firing next spring which will prepare us for our next step -- the critical design review."

The Ares I preliminary design review process began in May with the first stage and continues this month with the upper stage review. The Ares I integrated vehicle preliminary design review this summer will serve as the major checkpoint for the entire Ares I vehicle. Kickoff is scheduled for late July and the review runs through September. Next year the Ares Projects will move forward to the critical design review, beginning in November with the J-2X engine. The J-2X engine will power the Ares I upper stage to orbit after separation from the first stage.

With a length of approximately 173 feet, the Ares I first stage is derived from the solid rocket boosters used on the space shuttle. The primary difference between the shuttle booster and the Ares booster is the addition of the fifth booster segment which will give the launch vehicle greater thrust, or power, to lift the entire launch and crew vehicle stack, or about 2 million pounds, to Earth orbit.

This summer, engineers will begin casting a fully functional development motor for the first five-segment test in April 2009 at ATK's facility in Promontory, Utah. The static firing of the fully-developed five-segment booster will provide valuable data including thrust, maximum internal operating pressure, acoustics and vibration data. Currently there are five ground tests scheduled for the five-segment booster.

The Constellation Program, located at NASA's Johnson Space Center in Houston, has overall responsibility for development of the human space transportation system to accomplish NASA exploration missions to extend a human presence throughout the solar system. Johnson also is responsible for development of the Orion spacecraft and mission operations.

The Ares Projects at Marshall are responsible for design and development of the Ares I rocket and Ares V cargo launch vehicle.

NASA's Kennedy Space Center in Florida is responsible for ground and launch operations. The program also includes multiple project element teams at NASA centers and contract organizations around the nation.
› Back To Top