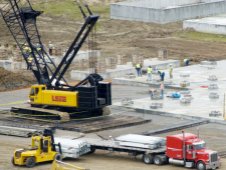 It has been 40 years since the skyline has changed at NASA’s John C. Stennis Space Center, but a new 300-foot rocket engine test stand is beginning to rise above the trees.

Fabricated steel began arriving by truck Oct. 24 for construction of the A-3 Test Stand that will be used to test the engine for the nation’s next generation of moon rockets. After staging work was completed, workers from Lafayette Steel Erector Inc. started assembling the 16 steel “sequences” or stages on the stand foundation and footings poured during the previous year.

By the time the initial phase of construction is complete in April 2009, some 4 million pounds of fabricated steel will be in place – and Stennis Space Center will have a towering structure that will be used to test the J-2X engine in development, said Robert Ross, deputy project manager for the A-3 Test Stand. That engine will help send humans back to the moon and possibly beyond.

Work on the A-3 Test Stand began with groundbreaking ceremonies in August 2007. At that time, NASA Deputy Administrator Shana Dale spoke of the historic nature of the project.

"Groundbreakings are about new beginnings," Dale said. "The first stand was erected at Stennis to test the Saturn V rocket of the Apollo Program. Testing of the space shuttle engines began here in the mid-1970s. And today, we're breaking ground for a new test stand, for the new spacecraft of a new era of exploration." 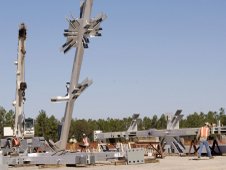 A pair of new rockets are being developed as part of NASA’s Constellation Program -- the Ares I crew launch vehicle and the Ares V cargo launch vehicle. In addition to helping humans go back to the moon and possibly beyond, the Constellation spacecraft will be used to send astronauts to the International Space Station. The new J-2X engine will help power both vehicles.

The engine will be required to start at high altitudes. However, none of the existing test stands at Stennis could simulate altitudes of the sort that were needed. Thus, the A-3 Test Stand is designed to test the new engine at sea level and to simulate altitudes up to 100,000 feet.

The design also calls for the new stand to withstand 1 million pounds of thrust. As Ross explained, although the J2-X will produce less than that at 294,000 pounds, "who knows what may be needed in the future."

In addition to steel work under way, Stennis engineers are scheduled to award a contract for test cell diffuser work in January. A contract to complete the general work of the project is scheduled to be awarded in February.

Coordinating the work of all the companies throughout the upcoming months poses one of the biggest challenges, Ross noted. "It's just going to take a lot of integration between contractors," he explained. 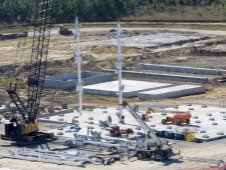 In addition, Stennis engineers are focusing on ensuring all NASA-supplied equipment and materials are on hand when needed, which is a challenging task. At the same time work is progressing on the steel fabrication, contractors are initiating construction of docks needed to deliver propellants to the A-3 stand.

Ross acknowledged delays have caused some to question the status of the project. However, he said all is on schedule to meet the May 2011 "need" date for the stand's completion.

"This is a tremendous time for everyone involved with the space program," Ross said. "Like everyone else involved, I feel lucky to be part of this project. For the rest of our lives, we’ll be able to look at the stand and all it enabled and say, 'I worked on that.'" Media contacts: Paul Foerman 228-688-1880
Paul.Foerman-1@nasa.gov
Stennis Space Center
› Back To Top