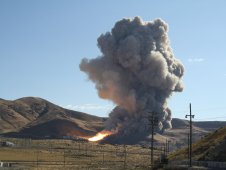 Ignition of Development Motor-2 during testing. Credit: NASA
View all images/videos With a loud roar and mighty column of flame, NASA and ATK Aerospace Systems successfully completed a two-minute, full-scale test of the largest and most powerful solid rocket motor designed for flight. The motor is potentially transferable to future heavy-lift launch vehicle designs.

The stationary firing of the first-stage development solid rocket motor, dubbed DM-2, was conducted by ATK, a division of Alliant Techsystems of Brigham City, Utah. DM-2 is the most heavily instrumented solid rocket motor in NASA history, with a total of 53 test objectives measured through more than 760 instruments.

Prior to the static test, the solid rocket motor was cooled to 40 degrees Fahrenheit to verify the performance of new materials and assess motor performance at low temperatures during the full-duration test. Initial test data showed the motor performance met all expectations.


View all images and videos from the DM-2 motor test


"For every few degrees the temperature rises, solid propellant burns slightly faster and only through robust ground testing can we understand how material and motor performance is impacted by different operating conditions," said Alex Priskos, first stage manager for Ares Projects at NASA's Marshall Space Flight Center in Huntsville, Ala. "Ground-testing at temperature extremes pushes this system to its limits, which advances our understanding of five-segment solid rocket motor performance."

The first-stage solid rocket motor is designed to generate up to 3.6-million pounds of thrust at launch. Information collected from this test, together with data from the first development motor test last year, will be evaluated to better understand the performance and reliability of the design.

Although similar to the solid rocket boosters that help power the space shuttle to orbit, the five-segment development motor includes several upgrades and technology improvements implemented by NASA and ATK engineers. Motor upgrades from a shuttle booster include the addition of a fifth segment, a larger nozzle throat, and upgraded insulation and liner. The motor cases are flight-proven hardware used on shuttle launches for more than three decades. The cases used in this ground test have collectively launched 59 previous missions.

After more testing, the first-stage solid rocket motor will be certified to fly at temperature ranges between 40-90 degrees Fahrenheit. The solid rocket motor was built as an element of NASA's Constellation Program and is managed by the Ares Projects Office at Marshall. ATK Aerospace Systems is the prime contractor.
Media Contact:
Michael Braukus, Headquarters, Washington
202-358-1979
Michael.J.Braukus@nasa.gov