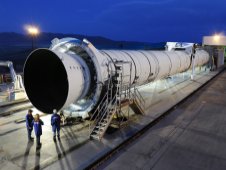 The five-segment DM-2 motor -- capable of producing 22 million horsepower and generating as much as 3.6 million pounds of thrust -- was developed by ATK Space Systems, a division of Alliant Techsystems of Brigham City, Utah, the prime contractor for the solid rocket motor, and is being assembled at ATK's test stand in Promontory, Utah. This will be the second, full-scale, full-duration test of the new development motor, which follows the successful test of DM-1 last fall.

"The successful DM-1 test provided our team with great results," said Andy Schorr, first stage, five-segment motor lead for Ares Projects at NASA's Marshall Space Flight Center in Huntsville, Ala. "All performance measurements were within specified limits and 46 total objectives, covering each significant design feature of the motor, were met.

During this "cold motor" test, DM-2's overall temperature will be lowered to 40 degrees Fahrenheit to validate the motor's performance in cold weather. This is in contrast to the DM-1 test firing which was conducted at ambient temperature. As the test is conducted, technicians will collect data from 759 sensors to assess the motor's performance and validate motor enhancements. Measurements gathered will be used to evaluate thrust, roll control, acoustics, motor vibrations, nozzle modifications and insulation upgrades.

Although similar to the solid rocket boosters that help power the space shuttle to orbit, DM-2 includes several upgrades and technology improvements, including the addition of a fifth segment, a modified nozzle throat and upgraded insulated liner. With these changes, engineers hope to improve performance and provide greater safety and reliability for NASA's next-generation launch vehicle.

"Our team is responsible for developing a robust propulsion system that can provide the thrust necessary to escape Earth's gravitational well and safely deliver astronaut crews and payloads to the International Space Station and beyond," Schorr said. "As we press forward, our goal is to optimize every aspect of the system for peak performance."

Large, solid rocket motors have been a primary propulsion element in modern space exploration – used as booster motors for the space shuttle, Atlas V and Delta IV rockets and several military applications. They provide high thrust, or lifting power, for relatively low cost, and do not have the more costly refrigeration and insulation requirements of cryogenic liquid-fueled rockets.

A development test motor is used to simulate conditions experienced in flight. It offers engineers an opportunity to better assess the strength of the motor's current design, spot any flaws in the new designs, verify new materials and certify manufacturing processes.

"Tests such as DM-2 allow our team to improve and enhance existing technology essential to maintaining America's preeminence in space, even as we look to new designs, new materials and new technologies with the potential to transform the future of human spaceflight," he said.
Media Contact:
Jennifer Morcone Stanfield, Marshall Space Flight Center, Huntsville, Ala.
256-544-7199
Jennifer.M.Stanfield@nasa.gov
› Back To Top