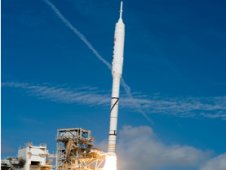 The Ares I-X rocket stood more than 325 feet tall on the launch pad at NASA's Kennedy Space Center, Fla. Spectators watched in awe as its massive solid rocket motor blazed to life with a thunderous roar, and the spacecraft rose off the launch pad.

But what steered this rocket on its path as it climbed through Earth's atmosphere? The answer is a roll control system.

The roll control system used for the recently completed Ares I-X test flight is different from the system being developed for its sister vehicle the Ares I, but operates on the same premise.

For the Ares I-X test flight the roll control system performed two primary functions for the vehicle: It rolled the vehicle 90 degrees after liftoff to emulate the Ares I roll attitude at launch, and was used to maintain a constant roll attitude during ascent up to stage separation. The system began operating just after the rocket cleared the tower at launch and shut down just before first stage separation. 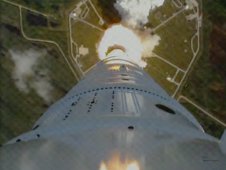 Unlike the system being designed for Ares I, the Ares I-X roll control propulsion system components were harvested from decommissioned Peacekeeper missiles, which were to be dismantled by the U.S. Air Force as part of the second Strategic Arms Reduction Treaty, called START II. The use of Peacekeeper parts for the roll control system – and shuttle parts for the first stage of Ares I-X – was an effective means for NASA to reduce the cost and development time of this flight test.

For the Ares I -- the first launch vehicle in NASA's Constellation Program, intended to transport astronauts and cargo to the International Space Station, the moon and beyond in coming decades -- engineers are designing a roll control system that will use clusters of small thrusters to keep the rocket from spinning or rolling. The first-stage roll control system will work together with the first-stage motor to steer the 2-million-pound vehicle during the first 126 seconds of flight, and then will cease operation when the first stage separates.

Engineers with the Marshall Center and Aerojet of Sacramento, Calif., recently completed two rounds of hot-fire testing for two prototype Ares I roll control thrusters at Aerojet’s state-of-the-art engine test facility in Sacramento. Aerojet is working on the project under an advanced development contract for the Marshall Center.

In the first series, one thruster design was tested at ambient pressure, or sea-level conditions and performed as expected, with a life cycle of more than four times the required mission duration. The unit demonstrated a wide range of operation in the pulse mode, which tested the thruster by turning it off and on for varying lengths of time, and in the steady-state mode, which allowed the thruster to continue running for longer periods of time. The second test series evaluated the second prototype thruster. It involved several days of testing to further evaluate the thruster performance under simulated pressure altitude conditions representative of first stage ascent. 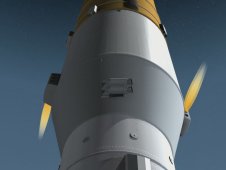 The Science of Steering

To learn more about steering the Ares I, a brief review of the science behind flying is in order. The science of air and space vehicle control is called flight dynamics. Three critical flight dynamics parameters -- pitch, roll and yaw -- are the three-dimensional angles of rotation around the vehicle's center of mass.

"For the Ares I, vehicle control will be somewhat similar to an airplane," said Phillip Best, subsystem manager for the reaction control system in the Ares I Upper Stage Office at NASA’s Marshall Space Flight Center in Huntsville, Ala. "On an airplane, roll control is accomplished with the ailerons -- hinged flaps on the wings -- that keep the wings level with the horizon," he said. “From liftoff to first-stage separation, roll control for Ares I will be accomplished by firing the first-stage roll control system thrusters."

The roll control system will receive commands from computers, electronics and other equipment, called the avionics system, to help steer it during flight. The avionics system is the brain that will control, or assist in controlling, most of the rocket's systems, including the thrusters. 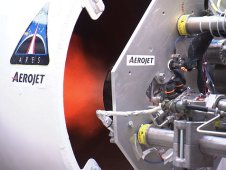 It is important for the vehicle to remain in a steady position during launch for several reasons, including keeping the astronauts oriented by providing them a continuous view of the horizon, and keeping the vehicle's antennas in the correct position for tracking and communications purposes.

Project engineers determined that there are a couple of sources that could generate unwanted roll in the Ares rocket. First, roll torques -- the tendency of a force to rotate an object around its axis -- may be generated internally because of the way burning fuel exits the first-stage nozzle. Second, rotation also may be caused by outside environmental forces, such as wind hitting the vehicle’s exterior. The thrusters will work to correct these roll disturbances.

How the Control Systems Will Work

The Ares I rocket, currently in development, will consist of a single solid rocket motor first stage with a single nozzle -- a large, bell-shaped structure at the aft end of the rocket where the burning fuel escapes and provides the thrust, or power, to propel the rocket off the launch pad. The first-stage nozzle will provide the pitch and yaw control, working in tandem with the roll control thrusters.

The first-stage roll control system will include two thruster modules, each containing six thrusters, situated on opposite sides of the vehicle's interstage. Each module will fire two thrusters at a time, providing 625 pounds of force (lbf) per thruster, or 1250 lbf per module. There is redundancy in the system, enabling each module to accommodate a single thruster failure.

Sensors aboard the rocket will detect changes in the flight path or changes in the vehicle's position, sending information to the avionics command center. The avionics computers will immediately determine the corrective action needed to get the rocket back on track. Within a fraction of a second, commands are sent to the appropriate thrusters that will fire to “right” the vehicle. 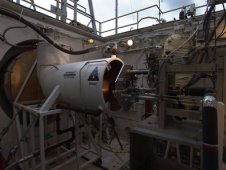 Designed as "pulsing" thrusters, these small control rockets can be turned on and off for brief periods of time, over and over again. This particular design can be pulsed for 1/10th of one second or may be fired 30 or 40 seconds at a time.

"We recognized the need to do early design and development work relative to large, pulsing, monopropellant thruster designs," Best said. "By maximizing heritage designs and capitalizing on lessons learned from past programs, we have been able to reduce recurring and non-recurring costs and deliver a design that will be less expensive to manufacture, all in less time."

For more information about Ares, visit: