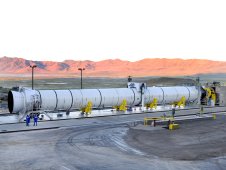 NASA and ATK unveil the completed Ares I first stage five-segment solid rocket booster today in Promontory, Utah. The completed solid rocket booster is now installed horizontally in a test stand that was modified from the space shuttle's four-segment configuration to fit the new five-segment Ares I booster. Instrumentation will be installed over the next month in preparation for the first major ground test of the NASA Constellation program August 27.

NASA's Ares I launch vehicle will launch the future explorers in the Orion spacecraft to the International Space Station, the moon and beyond. The upcoming test will provide valuable thrust, roll-control, acoustics and vibration data as engineers continue to design the Ares I rocket.

"Generating 3.6 million pounds of maximum thrust at liftoff, Ares I first stage provides the backbone of NASA's next-generation rocket," said Alex Priskos, first stage manager for the Ares Projects Office at NASA's Marshall Space Flight Center in Huntsville, Ala. "The planned two-minute test will be an awesome display of smoke and fire, a live testament reflecting the dedication, hard work and achievement of the people on this project. The entire Ares team is looking forward to the first development motor firing next month." 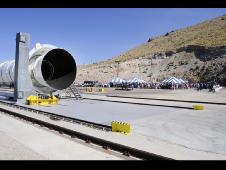 The Ares I first stage has been under development since 2005. Based on the design of the space shuttle's four-segment booster, the first stage differs from its predecessor in a few ways. These include the addition of a fifth segment, changes to the propellant grain, a larger nozzle opening and upgraded insulation and liner.

The propellant and cases remain the same as those used for more than three decades on the Space Shuttle Program. In fact, the cases used in this Ares I first stage ground test have collectively flown on 48 previous shuttle missions, including STS-1, the very first flight.

"Because we are using shuttle boosters in the design of the Ares I first stage, we are able to leverage decades of ground tests and shuttle flight processes," said Mike Kahn, executive vice president, ATK Space Systems. "Our streamlined processes, quality and infrastructure, combined with the knowledge and lessons learned that have been transferred to the Ares I first stage program, go a long way to ensure mission success for the human spaceflight program."