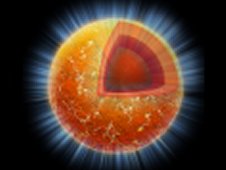 Artist concept of a neutron star within supernova remnant Cassiopeia A. Illustration credit: NASA/CXC/M.Weiss
View larger image NASA's Chandra X-ray Observatory has discovered the first direct evidence for a superfluid, a bizarre, friction-free state of matter, at the core of a neutron star. Superfluids created in laboratories on Earth exhibit remarkable properties, such as the ability to climb upward and escape airtight containers. The finding has important implications for understanding nuclear interactions in matter at the highest known densities.

Neutron stars contain the densest known matter that is directly observable. One teaspoon of neutron star material weighs six billion tons. The pressure in the star's core is so high that most of the charged particles, electrons and protons, merge resulting in a star composed mostly of uncharged particles called neutrons.

Two independent research teams studied the supernova remnant Cassiopeia A, or Cas A for short, the remains of a massive star 11,000 light years away that would have appeared to explode about 330 years ago as observed from Earth. Chandra data found a rapid decline in the temperature of the ultra-dense neutron star that remained after the supernova, showing that it had cooled by about four percent over a 10-year period.

"This drop in temperature, although it sounds small, was really dramatic and surprising to see," said Dany Page of the National Autonomous University in Mexico, leader of a team with a paper published in the February 25, 2011 issue of the journal Physical Review Letters. "This means that something unusual is happening within this neutron star."

Superfluids containing charged particles are also superconductors, meaning they act as perfect electrical conductors and never lose energy. The new results strongly suggest that the remaining protons in the star's core are in a superfluid state and, because they carry a charge, also form a superconductor.

"The rapid cooling in Cas A's neutron star, seen with Chandra, is the first direct evidence that the cores of these neutron stars are, in fact, made of superfluid and superconducting material," said Peter Shternin of the Ioffe Institute in St Petersburg, Russia, leader of a team with a paper accepted in the journal Monthly Notices of the Royal Astronomical Society.

"It turns out that Cas A may be a gift from the Universe because we would have to catch a very young neutron star at just the right point in time," said Page's co-author Madappa Prakash, from Ohio University. "Sometimes a little good fortune can go a long way in science."

Cas A will allow researchers to test models of how the strong nuclear force, which binds subatomic particles, behaves in ultradense matter. These results are also important for understanding a range of behavior in neutron stars, including "glitches," neutron star precession and pulsation, magnetar outbursts and the evolution of neutron star magnetic fields.

Small sudden changes in the spin rate of rotating neutron stars, called glitches, have previously given evidence for superfluid neutrons in the crust of a neutron star, where densities are much lower than seen in the core of the star. This latest news from Cas A unveils new information about the ultra-dense inner region of the neutron star.

"Previously we had no idea how extended superconductivity of protons was in a neutron star," said Shternin's co-author Dmitry Yakovlev, also from the Ioffe Institute.