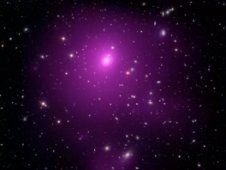 For the first time, astronomers have clearly seen the effects of "dark energy" on the most massive collapsed objects in the universe using NASA's Chandra X-ray Observatory. By tracking how dark energy has stifled the growth of galaxy clusters and combining this with previous studies, scientists have obtained the best clues yet about what dark energy is and what the destiny of the universe could be.

This work, which took years to complete, is separate from other methods of dark energy research such as supernovas. These new X-ray results provide a crucial independent test of dark energy, long sought by scientists, which depends on how gravity competes with accelerated expansion in the growth of cosmic structures. Techniques based on distance measurements, such as supernova work, do not have this special sensitivity.

Scientists think dark energy is a form of repulsive gravity that now dominates the universe, although they have no clear picture of what it actually is. Understanding the nature of dark energy is one of the biggest problems in science. Possibilities include the cosmological constant, which is equivalent to the energy of empty space. Other possibilities include a modification in general relativity on the largest scales, or a more general physical field.

To help decide between these options, a new way of looking at dark energy is required. It is accomplished by observing how cosmic acceleration affects the growth of galaxy clusters over time.

"This result could be described as 'arrested development of the universe'," said Alexey Vikhlinin of the Smithsonian Astrophysical Observatory in Cambridge, Mass., who led the research. "Whatever is forcing the expansion of the universe to speed up is also forcing its development to slow down."

Vikhlinin and his colleagues used Chandra to observe the hot gas in dozens of galaxy clusters, which are the largest collapsed objects in the universe. Some of these clusters are relatively close and others are more than halfway across the universe.

The results show the increase in mass of the galaxy clusters over time aligns with a universe dominated by dark energy. It is more difficult for objects like galaxy clusters to grow when space is stretched, as caused by dark energy. Vikhlinin and his team see this effect clearly in their data. The results are remarkably consistent with those from the distance measurements, revealing general relativity applies, as expected, on large scales.

"For years, scientists have wanted to start testing how gravity works on large scales and now, we finally have," said William Forman, a co-author of the study from the Smithsonian Astrophysical Observatory. "This is a test that general relativity could have failed."

When combined with other clues -- supernovas, the study of the cosmic microwave background, and the distribution of galaxies -- this new X-ray result gives scientists the best insight to date on the properties of dark energy.

The study strengthens the evidence that dark energy is the cosmological constant. Although it is the leading candidate to explain dark energy, theoretical work suggests it should be about 10 raised to the power of 120 times larger than observed. Therefore, alternatives to general relativity, such as theories involving hidden dimensions, are being explored.

"Putting all of this data together gives us the strongest evidence yet that dark energy is the cosmological constant, or in other words, that 'nothing weighs something'," said Vikhlinin. "A lot more testing is needed, but so far Einstein's theory is looking as good as ever."

These results have consequences for predicting the ultimate fate of the universe. If dark energy is explained by the cosmological constant, the expansion of the universe will continue to accelerate, and the Milky Way and its neighbor galaxy, Andromeda, never will merge with the Virgo cluster. In that case, about a hundred billion years from now, all other galaxies ultimately would disappear from the Milky Way's view and, eventually, the local superclusters of galaxies also would disintegrate.

The work by Vikhlinin and his colleagues will be published in two separate papers in the Feb. 10 issue of The Astrophysical Journal. NASA's Marshall Space Flight Center in Huntsville, Ala., manages the Chandra program for NASA's Science Mission Directorate in Washington. The Smithsonian Astrophysical Observatory controls Chandra's science and flight operations from Cambridge, Mass.