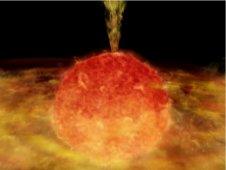 Artist concept of BP Piscium, a more evolved version of our Sun. Illustration credit: CXC/M. Weiss
View large image Evidence that a star has recently engulfed a companion star or a giant planet has been found using NASA's Chandra X-ray Observatory. The likely existence of such a "cannibal" star provides new insight into how stars and the planets around them may interact as they age.

The star in question, known as BP Piscium (BP Psc), appears to be a more evolved version of our Sun, but with a dusty and gaseous disk surrounding it. A pair of jets several light years long blasting out of the system in opposite directions has also been seen in optical data. While the disk and jets are characteristics of a very young star, several clues -- including the new results from Chandra -- suggest that BP Psc is not what it originally appeared to be.

Instead, astronomers have suggested that BP Psc is an old star in its so-called red giant phase. And, rather than being hallmarks of its youth, the disk and jets are, in fact, remnants of a recent and catastrophic interaction whereby a nearby star or giant planet was consumed by BP Psc.

When stars like the Sun begin to run of nuclear fuel, they expand and shed their outer layers. Our Sun, for example, is expected to swell so that it nearly reaches or possibly engulfs Earth, as it becomes a red giant star.

"It appears that BP Psc represents a star-eat-star Universe, or maybe a star-eat-planet one," said Joel Kastner of the Rochester Institute of Technology, who led the Chandra study. "Either way, it just shows it's not always friendly out there."

Several pieces of information have led astronomers to rethink how old BP Psc might be. First, BP Psc is not located near any star-forming cloud, and there are no other known young stars in its immediate vicinity. Secondly, in common with most elderly stars, its atmosphere contains only a small amount of lithium. Thirdly, its surface gravity appears to be too weak for a young star and instead matches up with one of an old red giant.

Chandra adds to this story. Young, low-mass stars are brighter than most other stars in X-rays, and so X-ray observations can be used as a sign of how old a star may be. Chandra does detect X-rays from BP Psc, but at a rate that is too low to be from a young star. Instead, the X-ray emission rate measured for BP Psc is consistent with that of rapidly rotating giant stars.

The spectrum of the X-ray emission -- that is how the amount of X-rays changes with wavelength -- is consistent with flares occurring on the surface of the star, or with interactions between the star and the disk surrounding it. The magnetic activity of the star itself might be generated by a dynamo caused by its rapid rotation. This rapid rotation can be caused by the engulfment process.

"It seems that BP Psc has been energized by its meal," said co-author Rodolfo (Rudy) Montez Jr., also from the Rochester Institute of Technology.

The star's surface is obscured throughout the visible and near-infrared bands, so the Chandra observation represents the first detection at any wavelength of BP Psc itself.

"BP Psc shows us that stars like our Sun may live quietly for billions of years," said co-author David Rodriguez from UCLA, "but when they go, they just might take a star or planet or two with them."

Although any close-in planets were presumably devastated when BP Psc turned into a giant star, a second round of planet formation might be occurring in the surrounding disk, hundreds of millions of years after the first round. A new paper using observations with the Spitzer Space Telescope has reported possible evidence for a giant planet in the disk surrounding BP Psc. This might be a newly formed planet or one that was part of the original planetary system.

"Exactly how stars might engulf other stars or planets is a hot topic in astrophysics today," said Kastner. "We have many important details that we still need to work out, so objects like BP Psc are really exciting to find."

These results appeared in The Astrophysical Journal Letters. Other co-authors on the study were Nicolas Grosso of the University of Strasbourg, Ben Zuckerman from UCLA, Marshall Perrin from the Space Telescope Science Institute, Thierry Forveille of the Grenoble Astrophysics Laboratory in France and James Graham from University of California, Berkeley.