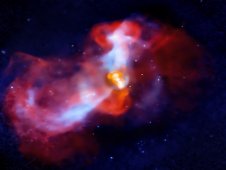 Astronomers studying this black hole and its effects have been struck by the remarkable similarities between it and a volcano in Iceland that made headlines early this year.

At a distance of about 50 million light years, M87 is relatively close to Earth and lies at the center of the Virgo cluster, which contains thousands of galaxies. M87's location, coupled with long observations over Chandra's lifetime, has made it an excellent subject for investigations of how a massive black hole impacts its environment.

"Our results show in great detail that supermassive black holes have a surprisingly good control over the evolution of the galaxies in which they live," said Norbert Werner of the Kavli Institute for Particle Astrophysics and Cosmology at SLAC Linear Accelerator Center, who led one of two papers describing the study. "And it doesn't stop there. The black hole's reach extends ever farther into the entire cluster, similar to how one small volcano can affect practically an entire hemisphere on Earth."

The cluster surrounding M87 is filled with hot gas glowing in X-ray light, which is detected by Chandra. As this gas cools, it can fall toward the galaxy's center where it should continue to cool even faster and form new stars.

However, radio observations with the Very Large Array suggest that in M87 jets of very energetic particles produced by the black hole interrupt this process. These jets lift up the relatively cool gas near the center of the galaxy and produce shock waves in the galaxy's atmosphere because of their supersonic speed.

The scientists involved in this research have found the interaction of this cosmic "eruption" with the galaxy's environment to be very similar to that of the Eyjafjallajokull volcano, which forced much of Europe to close its airports earlier this year.

With Eyjafjallajokull, pockets of hot gas blast through the surface of the lava, generating shock waves that can be seen passing through the grey smoke of the volcano. The hot gas then rises up in the atmosphere, dragging the dark ash with it. This process can be seen in a movie of the Eyjafjallajokull volcano where the shock waves propagating in the smoke are followed by the rise of dark ash clouds into the atmosphere.

In the analogy with Eyjafjallajokull, the energetic particles produced in the vicinity of the black hole rise through the X-ray emitting atmosphere of the cluster, lifting up the coolest gas near the center of M87 in their wake, much like the hot volcanic gases drag up the clouds of dark ash. And just like the volcano here on Earth, shockwaves can be seen when the black hole pumps energetic particles into the cluster gas.

"This analogy shows that even though astronomical phenomena can occur in exotic settings and over vast scales, the physics can be very similar to events on Earth," said co-author Aurora Simionescu, also of the Kavli Institute. In M87, the plumes of cooler gas being lifted upwards contain as much mass as all of the gas contained within 12,000 light years of the center of the galaxy cluster. This shows the black hole-powered volcano is very efficient at blasting the galaxy free of the gas that would otherwise cool and form stars.

"This gas could have formed hundred of millions stars as massive as our own Sun, if the black hole had not removed it from the center of the galaxy. That seems like a much worse disruption than what the airline companies on Earth had to put up with earlier this year," said Evan Million, a graduate student at Stanford University and lead-author of the second paper to be published about this deep study of M87.

The eruption in M87 that lifted up the cooler gas must have occurred about 150 million years earlier, but a smaller eruption only about 11 million years earlier produced the shock wave. The Chandra image was based on an observation lasting almost 7 days. X-ray data from ESA's XMM-Newton was also used in this study.

The two papers describing these results appeared in the journal of the Monthly Notices of the Royal Astronomical Society. NASA's Marshall Space Flight Center in Huntsville, Ala., manages the Chandra program for NASA's Science Mission Directorate in Washington. The Smithsonian Astrophysical Observatory controls Chandra's science and flight operations from Cambridge, Mass.