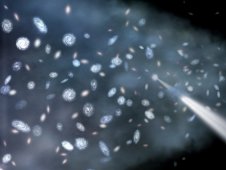 Using observations with NASA's Chandra X-ray Observatory and ESA's XMM-Newton, astronomers have announced a robust detection of a vast reservoir of intergalactic gas about 400 million light years from Earth. This discovery is the strongest evidence yet that the "missing matter" in the nearby Universe is located in an enormous web of hot, diffuse gas.

This missing matter -- which is different from dark matter -- is composed of baryons, the particles, such as protons and electrons, that are found on the Earth, in stars, gas, galaxies, and so on. A variety of measurements of distant gas clouds and galaxies have provided a good estimate of the amount of this "normal matter" present when the universe was only a few billion years old. However, an inventory of the much older, nearby universe has turned up only about half as much normal matter, an embarrassingly large shortfall.

The mystery then is where does this missing matter reside in the nearby universe? This latest work supports predictions that it is mostly found in a web of hot, diffuse gas known as the Warm-Hot Intergalactic Medium (WHIM). Scientists think the WHIM is material left over after the formation of galaxies, which was later enriched by elements blown out of galaxies.

"Evidence for the WHIM is really difficult to find because this stuff is so diffuse and easy to see right through," said Taotao Fang of the University of California at Irvine and lead author of the latest study. "This differs from many areas of astronomy where we struggle to see through obscuring material."

To look for the WHIM, the researchers examined X-ray observations of a rapidly growing supermassive black hole known as an active galactic nucleus, or AGN. This AGN, which is about two billion light years away, generates immense amounts of X-ray light as it pulls matter inwards.

Lying along the line of sight to this AGN, at a distance of about 400 million light years, is the so-called Sculptor Wall. This "wall", which is a large diffuse structure stretching across tens of millions of light years, contains thousands of galaxies and potentially a significant reservoir of the WHIM if the theoretical simulations are correct. The WHIM in the wall should absorb some of the X-rays from the AGN as they make their journey across intergalactic space to Earth.

Using new data from Chandra and previous observations with both Chandra and XMM-Newton, absorption of X-rays by oxygen atoms in the WHIM has clearly been detected by Fang and his colleagues. The characteristics of the absorption are consistent with the distance of the Sculptor Wall as well as the predicted temperature and density of the WHIM.

This result gives scientists confidence that the WHIM will also be found in other large-scale structures.

Several previous claimed detections of the hot component of the WHIM have been controversial because the detections had been made with only one X-ray telescope and the statistical significance of many of the results had been questioned.

"Having good detections of the WHIM with two different telescopes is really a big deal," said co-author David Buote, also from the University of California at Irvine. "This gives us a lot of confidence that we have truly found this missing matter."

In addition to having corroborating data from both Chandra and XMM- Newton, the new study also removes another uncertainty from previous claims. Because the distance of the Sculptor Wall is already known, the statistical significance of the absorption detection is greatly enhanced over previous "blind" searches. These earlier searches attempted to find the WHIM by observing bright AGN at random directions on the sky, in the hope that their line of sight intersects a previously undiscovered large-scale structure.

Confirmed detections of the WHIM have been made difficult because of its extremely low density. Using observations and simulations, scientists calculate the WHIM has a density equivalent to only 6 protons per cubic meter. For comparison, the interstellar medium -- the very diffuse gas in between stars in our galaxy -- typically has about a million hydrogen atoms per cubic meter.

"Evidence for the WHIM has even been much harder to find than evidence for dark matter, which is invisible but can be detected because of its gravitational effects on stars and galaxies," said Fang.

There have been important detections of possible WHIM in the nearby Universe with relatively low temperatures of about 100,000 degrees using ultraviolet observations and relatively high temperature WHIM of about 10 million degrees using observations of X-ray emission in galaxy clusters. However, these are expected to account for only a relatively small fraction of the WHIM. The X-ray absorption studies reported here probe temperatures of about a million degrees where most of the WHIM is predicted to be found.

These results appear in the May 10th issue of The Astrophysical Journal. NASA's Marshall Space Flight Center in Huntsville, Ala., manages the Chandra program for NASA's Science Mission Directorate in Washington. The Smithsonian Astrophysical Observatory controls Chandra's science and flight operations from Cambridge, Mass.