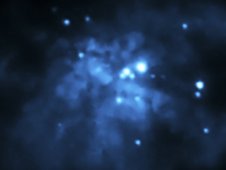 New evidence from NASA's Chandra X-ray Observatory and ESA's XMM-Newton strengthens the case that two mid-sized black holes exist close to the center of a nearby starburst galaxy. These “survivor” black holes avoided falling into the center of the galaxy and could be examples of the seeds required for the growth of supermassive black holes in galaxies, including the one in the Milky Way.

For several decades, scientists have had strong evidence for two distinct classes of black hole: the stellar-mass variety with masses about ten times that of the Sun, and the supermassive ones, located at the center of galaxies, that range from hundreds of thousands to billions of solar masses.

But a mystery has remained: what about black holes that are in between? Evidence for these objects has remained controversial, and until now there were no strong claims of more than one such black hole in a single galaxy. Recently, a team of researchers has found signatures in X-ray data of two mid-sized black holes in the starburst galaxy M82 located 12 million light years from Earth.

"This is the first time that good evidence for two mid-sized black holes has been found in one galaxy," said Hua Feng of the Tsinghua University in China, who led two papers describing the results. "Their location near the center of the galaxy might provide clues about the origin of the Universe's largest black holes -- supermassive black holes found in the centers of most galaxies."

In this picture, clusters that were not massive enough or close enough to the center of the galaxy to fall in would survive, as would any black holes they contain.

"We can't say whether this process actually occurred in M82, but we do know that both of these possible mid-sized black holes are located in or near star clusters," said Phil Kaaret from the University of Iowa, who co-authored both papers. "Also, M82 is the nearest place to us where the conditions are similar to those in the early Universe, with lots of stars forming."

The evidence for these two "survivor" black holes comes from how their X-ray emission varies over time and analysis of their X-ray brightness and spectra, i.e., the distribution of X-rays with energy.

Chandra and XMM-Newton data show that the X-ray emission for one of these objects changes in a distinctive manner similar to stellar-mass black holes found in the Milky Way. Using this information and theoretical models, the team estimated this black hole's mass is between 12,000 and 43,000 times the mass of the Sun. This mass is large enough for the black hole to generate copious X-rays by pulling gas directly from its surroundings, rather than from a binary companion, like with stellar-mass black holes.

The second object, located 600 light years in projection away from the center of M82, was observed by both Chandra and XMM-Newton. During X-ray outbursts, periodic and random variations normally present in the X-ray emission disappear, a strong indication that a disk of hot gas dominates the X-ray emission. A detailed fit of the X-ray data indicates that the disk extends all the way to the innermost stable orbit around the black hole. Similar behavior has been seen from stellar-mass black holes in our Galaxy, but this is the first likely detection in a candidate intermediate-mass black hole.

The radius of the innermost stable orbit depends only on the mass and spin of the black hole. The best model for the X-ray emission implies a rapidly spinning black hole with mass in the range 200 to 800 times the mass of the Sun. The mass agrees with theoretical estimates for a black hole created in a star cluster by runaway collisions of stars.

"This result is one of the strongest pieces of evidence to date for the existence of an intermediate-mass black hole," said Feng. "This looks just like well-studied examples of stellar-mass black holes, except for being more than 20 times as massive."