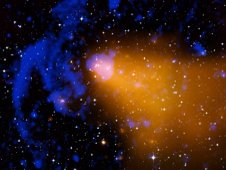 Two new and independent studies have put Einstein's General Theory of Relativity to the test like never before. These results, made using NASA's Chandra X-ray Observatory, show Einstein's theory is still the best game in town.

Each team of scientists took advantage of extensive Chandra observations of galaxy clusters, the largest objects in the Universe bound together by gravity. One result undercuts a rival gravity model to General Relativity, while the other shows that Einstein's theory works over a vast range of times and distances across the cosmos.

"If General Relativity were the heavyweight boxing champion, this other theory was hoping to be the upstart contender," said Fabian Schmidt of the California Institute of Technology in Pasadena, who led the study. "Our work shows that the chances of its upsetting the champ are very slim."

In recent years, physicists have turned their attention to competing theories to General Relativity as a possible explanation for the accelerated expansion of the universe. Currently, the most popular explanation for the acceleration is the so-called cosmological constant, which can be understood as energy that exists in empty space. This energy is referred to as dark energy to emphasize that it cannot be directly detected.

In the f(R) theory, the cosmic acceleration comes not from an exotic form of energy but from a modification of the gravitational force. The modified force also affects the rate at which small enhancements of matter can grow over the eons to become massive clusters of galaxies, opening up the possibility of a sensitive test of the theory.

Schmidt and colleagues used mass estimates of 49 galaxy clusters in the local universe from Chandra observations, compared them with theoretical model predictions and studies of supernovas, the cosmic microwave background, and the large-scale distribution of galaxies.

They found no evidence that gravity is different from General Relativity on scales larger than 130 million light years. This limit corresponds to a hundred-fold improvement on the bounds of the modified gravitational force's range that can be set without using the cluster data.

"This is the strongest ever constraint set on an alternative to General Relativity on such large distance scales," said Schmidt. "Our results show that we can probe gravity stringently on cosmological scales by using observations of galaxy clusters."

The reason for this dramatic improvement in constraints can be traced to the greatly enhanced gravitational forces acting in clusters as opposed to the universal background expansion of the universe. The cluster-growth technique also promises to be a good probe of other modified gravity scenarios, such as models motivated by higher- dimensional theories and string theory.

To probe this question, a group at Stanford University compared Chandra observations of how rapidly galaxy clusters have grown over time to the predictions of General Relativity. The result is nearly complete agreement between observation and theory.

“Einstein's theory succeeds again, this time in calculating how many massive clusters have formed under gravity's pull over the last five billion years,” said David Rapetti of the Kavli Institute for Particle Astrophysics and Cosmology (KIPAC) at Stanford University and SLAC National Accelerator Laboratory, who led the new study. “Excitingly and reassuringly, our results are the most robust consistency test of General Relativity yet carried out on cosmological scales."

Rapetti and his colleagues based their results on a sample of 238 clusters detected across the whole sky by the now-defunct ROSAT X-ray telescope. These data were enhanced by detailed mass measurements for 71 distant clusters using Chandra, and 23 relatively nearby clusters using ROSAT, and combined with studies of supernovas, the cosmic microwave background, the distribution of galaxies and distance estimates to galaxy clusters.

Galaxy clusters are important objects in the quest to understand the Universe as a whole. Because the observations of the masses of galaxy clusters are directly sensitive to the properties of gravity, they provide crucial information. Other techniques such as observations of supernovas or the distribution of galaxies measure cosmic distances, which depend only on the expansion rate of the universe. In contrast, the cluster technique used by Rapetti and his colleagues measure in addition the growth rate of the cosmic structure, as driven by gravity.

"Cosmic acceleration represents a great challenge to our modern understanding of physics," said Rapetti's co-author Adam Mantz of NASA's Goddard Space Flight Center in Maryland. "Measurements of acceleration have highlighted how little we know about gravity at cosmic scales, but we're now starting to push back our ignorance."

The paper by Fabian Schmidt was published in Physics Review D, Volume 80 in October 2009 and is co-authored by Alexey Vikhlinin of the Harvard-Smithsonian Center for Astrophysics in Cambridge, Massachusetts, and Wayne Hu of the University of Chicago, Illinois. The paper by David Rapetti was recently accepted for publication in the Monthly Notices of the Royal Astronomical Society and is co- authored by Mantz, Steve Allen of KIPAC at Stanford and Harald Ebeling of the Institute for Astronomy in Hawaii.